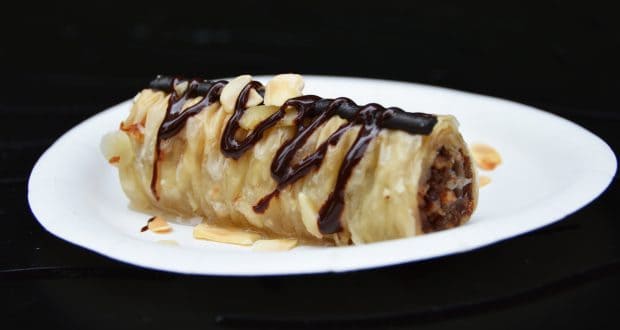 Snacks should be part of any Walt Disney World vacation. Since Disney goes above and beyond in most areas, you’ll expect their snacks to be mind blowing as well. Here are ten snacks that fit that description. Some make the list because they’re unique, others because their iconic and will make you feel like you’re at home. These are snacks, not desserts, although some of them could qualify as both. You won’t find items such as ‘Ohana Bread Pudding or The Grey Stuff on this list, because those end the meal at a Walt Disney World restaurant. The items on this list are found at snack stands or quick service places that feature mostly snacks. Location is provided where needed. Otherwise, the snack is sold at multiple locations.

If you want to know how something as simple as fresh fruit can blow your mind, pick up some ice cold watermelon on a hot day in Florida. Fresh fruit is sold in all four theme parks; you’ll find both cut and whole. You will have the satisfaction of knowing that you ate something healthy, and fruit is filling and hydrating as well.

You used to have to head to the Magic Kingdom to get Dole Whip, but now it’s sold in other locations. This is another refreshing snack on a hot day that won’t pack on the pounds. Dole Whip is a frozen pineapple treat that you need to order at least once on your vacation. If you don’t like it full strength, order it mixed with vanilla soft serve.

Enough of the healthy snacks, it’s time to move onto something gooey and sweet. If you’re looking for a Warm Cinnamon Roll, head to Gaston’s Tavern at the Magic Kingdom. The rolls are large enough to share, but you won’t want to. Pair your roll with LeFrou’s Brew and enjoy them when the big guy himself is greeting his fans by his statue. Watching him interact with guests (especially children) is hilarious.

There are plenty of great baked goods sold at Epcot. If you have a sweet tooth you’ll want to stop by both France and Norway. Pretty much anything from either bakery could make this list. One unique choice at Kringla Bakeri Og Kafe in Norway is the Troll Horn. A crispy pastry shell is filled with whipped cream and cloudberry jam. The whole thing is covered in sugar. It’s sweet, but not too sweet. The Troll Horn is simple and delicious.

Not all snacks need to be sweet, and not all potato chips that you’ll find at Walt Disney World come from a bag. Head to Promenade Refreshments at Epcot for House-Made Ranch Kettle Chips. They have just the right amount of seasoning and the perfect amount of crunch. You can order your chips from this stand as a side for a hot dog, but they’re tasty enough to stand up on their own.

Back to sweet again, this snack is found at Sleepy Hollow at the Magic Kingdom. The Fresh Fruit Waffle Sandwich is so tasty that you’ll want to try to make it yourself at home. A thick, warm waffle is smothered in a generous layer of chocolate hazelnut spread (think Nutella), and then topped with fresh fruit. The fruit usually consists of blueberries, strawberries, and banana slices, but that could change depending on what is in season. Make sure you grab a couple of extra napkins, because this thing can be messy!

There is something special about this iconic snack. Not all that long ago Mickey Pretzels were hard to find, but now they are everywhere. These warm, soft pretzels are vegan, so people who don’t eat animal products can enjoy them as well. You can often order cheese sauce (not vegan) on the side to dip your pretzel in. Mickey Pretzels are a great snack if you need something to tide you over until your next meal.

Cupcakes are everywhere at Walt Disney World! You’ll find Red Velvet Cupcakes, Butterfinger Cupcakes, Darth Vader Cupcakes, Seasonal Cupcakes, Zebra Cupcakes, cupcakes for special diets, and dozens more. Order a couple of different types and share so that everyone in your party can have a taste. That way, you’ll also be able to taste more flavors of them yourself.

2. Anything at the Epcot International Food & Wine Festival

If you like to snack, your mind will be blown at the Epcot International Food & Wine Festival. Held each fall, more than 30 extra booths are placed around World Showcase, giving you a chance to snack your way around the world. Specialties from different countries are featured in snack sized portions. Pick up a Passport at any booth so that you can see who is selling what, and where to go next.