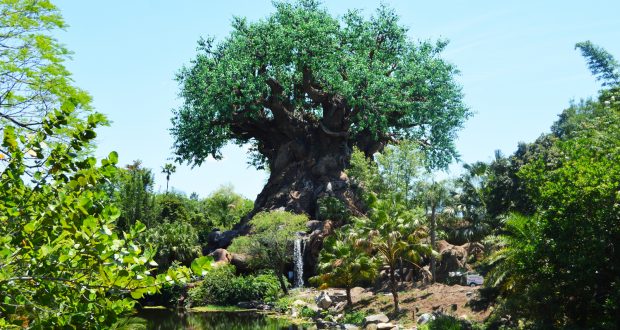 Perhaps the most popular attraction in Disney’s Animal Kingdom can be found in the Africa section of the park in the fictional village of Harambe. Kilimanjaro Safaris invites guests to enter into the Harambe Reserve for a two week safari through the lush forests and savannahs of Africa. Along the way, guests can enjoy up close encounters with animals like rhinos, elephants, cheetahs, lions, zebras, wild dogs, and giraffes. No experience on Kilimanjaro Safaris is the same thanks to the live animals, so guests love to return time and time again.

Found near the exit of Kilimanjaro Safaris is a self-guided walking tour that showcases beautiful scenery and animals. The Gorilla Falls Exploration Trail definitely shouldn’t be missed by guests as it offers peaceful walkways and up close encounters with plenty of animals including gorillas. The gorillas are the highlight of the trail and can be found in a massive hilly habitat filled with waterfalls near the end of the trail.

Guests looking for adventure and the chance to cool off on hot days in Disney’s Animal Kingdom should look no further than Kali River Rapids in the Asia section of the park. The attraction brings guests on a thrilling journey down the Chakranadi River where the devastation and destruction of illegal logging is prominently shown. Guests who enjoy a ride on Kali River Rapids can learn an important message about conservation as well as get soaking wet!

In addition to the Gorilla Falls Exploration Trail, Disney’s Animal Kingdom is home to a second self-guided walking tour that allows guests to explore nature at their own pace. The Maharajah Jungle Trek can be found in the Asia section of the park and invites guests into the royal forest of Anandapur. Along the way guests can enjoy a massive aviary, beautifully detailed paths, and gorgeous Asian Tigers lounging in their large habitat.

One of the most popular attractions in Disney’s Animal Kingdom can also be found in the Asia section of the park and brings a mythical beast to life. Expedition Everest begins as a serene tea train tour but soon takes a thrilling turn as guests find themselves scrambling to escape the Forbidden Mountain and the clutches of the fabled Yeti. With plenty of thrills and close encounters with the Yeti, guests should definitely not miss out on Expedition Everest!

Another thrilling attraction found in Disney’s Animal Kingdom is Dinosaur which is located in the heart of Dinoland. The attraction invites guests into the Dino Institute where the technology to travel back in time has been perfected. While guests are supposed to enjoy a serene tour through prehistoric times, they find themselves on a thrilling race to find a particular dinosaur before a massive asteroid impact. With plenty of dark moments and big thrills, Dinosaur is a mind blowing attraction in Disney’s Animal Kingdom.

Also found in Dinoland is an attraction which takes a classic Disney ride concept and turns it prehistoric. TriceraTop Spin is a spinner type attraction similar to the classic Dumbo the Flying Elephant found over in the Magic Kingdom. However, Disney’s Animal Kingdom’s version features triceratops for guests to ride in while checking out the sights in Dinoland below.

While many guests are familiar with the Tree of Life in Disney’s Animal Kingdom, they might have their minds blown when they find out that there is a theater housed in the roots of the massive tree! It’s Tough to be a Bug is a 3D show which is hosted by Flik from the Pixar film A Bug’s Life. The show aims to teach guests how bugs are not disgusting or menaces, but rather an integral part of the environment. With some surprises and familiar faces along the way, guests should not miss out on a showing of It’s Tough to be a Bug!

2016-11-06
Caitlin Kane
Previous: Woman Arrested at Disney’s Grand Floridian Resort at Walt Disney World for Battery and Resisting Arrest
Next: 7 Experiences You Should Visit After Dark at Disney’s Hollywood Studios