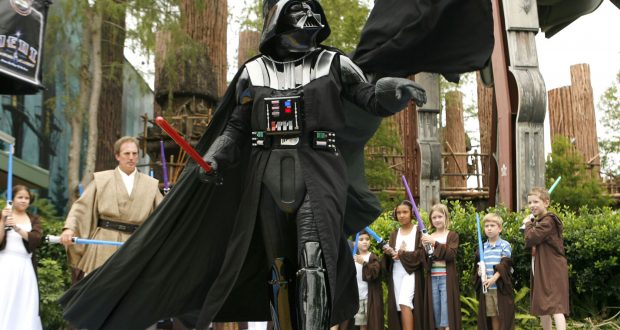 Disney’s Hollywood Studios is a park in transition, but that doesn’t mean that there’s not still plenty to see and do. Here are ten mind blowing experiences at the park. There are plenty more. One quick note; Club Villain is not on this list, because it is not known whether or not the special event will become permanent. The things listed here are for everyone, no matter the season.

You could be a fan of adventure, or maybe you prefer happily ever after. It doesn’t matter, Disney’s Hollywood Studios has a live show for you! Relive some favorite moments then see how movie magic is made at Indiana Jones Epic Stunt Spectacular!. Believe in love again while watching Beauty and the Beast – Live on Stage. You and your kids can sing along with For the First Time in Forever: A Frozen Sing-Along Celebration. Be part of the street show with Citizens of Hollywood. Those are just a few of the live shows at Disney’s Hollywood Studios. Of course, end your day with the mind blowing Fantasmic!. It is live entertainment at its best.

9. The Twilight Zone Tower of Terror

If Tower of Terror doesn’t blow your mind, it’s because your mind hasn’t yet caught up with the rest of your body. Visually, the ride is stunning. Physically, it’s quite an experience. You will drop 13 stories; faster than the speed of gravity. You’ll then head back up, only to drop again. The ride sequence is random, meaning it won’t be the same twice. One thing remains the same each ride, it will always be a thrill.

The idea of finding comfort food in a theme park could be enough to blow your mind, but at 50’s Prime Time Cafe it’s the experience that you will remember. You’ll dine at the kitchen table, complete with a black and white TV playing sitcoms from 1955. Your server will be a member of your family, who will remind you to finish your vegetables if you want dessert. Entrees include classics such as Mom’s Old-fashioned Pot Roast and Cousin Ryan’s Vegetable Lasagna. If you can’t get a reservation, try the Tune-In Lounge next door. The full menu is available, as well as retro drinks for those of age.

If you’ve ever dreamed of visiting a galaxy far, far away, you can do that at Disney’s Hollywood Studios. Board a Starspeeder 1000 for the ride of your life. You’ll see places and characters from the movies, and you could be called out as the Rebel Spy. The ride is mind blowing the first time you ride it, but that’s just the beginning. Get on again for a totally different experience. There are so many different ride combinations that you’ll have to ride over and over again to hit them all, and that’s not a bad thing.

50’s Prime Time Cafe is not the only restaurant that will transport you back to the 1950’s. At Sci-Fi Dine-In Theater Restaurant, you’ll eat in a car that is parked at a drive-in theater. Trailers from classic cheesy films will play on the screen in the front while you dine. The whole concept is a lot of fun. If you want to blow your mind, order the Oreo Cookie Milkshake. It’s that good.

Feel like a kid again on Toy Story Mania!. You’ll play carnival style games with the encouragement of characters from the Toy Story franchise. To make the experience even more mind blowing, you’ll play in 3D. Your whole family will have a blast, literally.

4. Jedi Training: Trials of the Temple

Do you want to blow the mind of your child? Sign him or her up for Jedi Training: Trials of the Temple. Children ages 4-12 will learn the ways of the Force and battle the Dark Side. Spots go quickly, so sign up when the park opens at the Indiana Jones Adventure Outpost. Your child or children must be with you, they can’t be riding Toy Story Mania! while you sign them up.

If you need to go upside down at 60 MPH in order to have your mind blown, try Rock ‘n’ Roller Coaster. There are three inversions, and you won’t know that they’re coming because the ride is in the dark. The premise is great, you’re late for an Aerosmith concert and the band plans to get you there as fast as possible. Ride early if you don’t have FastPass+ because the line will not blow your mind.

Star Wars: A Galactic Spectacular is an incredible show that uses fireworks, lasers, projection effects, the music of John Williams, and more to bring you an incredible experience. If that’s not mind blowing enough, add Darth Vader cupcakes and other treats, beverages, a Chewbacca stein, and a reserved viewing area. Star Wars: A Galactic Spectacular Dessert Party is a delicious way to enjoy the show, and you won’t have to fight through the crowd to find a decent viewing spot.

If you love characters, your mind will be blown at Disney’s Hollywood Studios. You might find Buzz and Woody, Chewbacca, Kylo Ren, Disney Junior favorites, Olaf, Mickey, Minnie, and more. If you’re lucky, you might discover Character Palooza. You won’t find it on the My Disney Experience App or Times Guide, and even Cast Members will tell you that it doesn’t exist. Character Palooza features different characters each day, and the location and time changes. If you would prefer not wandering around, looking for a secret location, make a reservation for Minnie’s Seasonal Dining at Hollywood & Vine. The theme depends on the time of year. You’ll enjoy a buffet of seasonal favorites, and be greeted by Minnie, Mickey, Daisy, Donald, and Goofy.