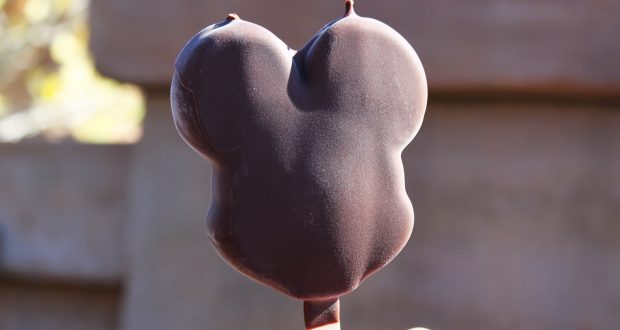 Chocolate can make anyone’s day a little bit brighter. It is decadent, indulgent, and delicious at the same time. Fortunately, this is something that is well understood by Disney, and there is plenty of chocolate to be found. Here are our favorite chocolate treats that you’ll be able to try while at Walt Disney World. Some are mostly chocolate, while with others the chocolate enhances the flavor. If you have a favorite chocolate creation that you must indulge in whenever you head to Central Florida, feel free to share in the comments below. There are plenty of incredible chocolate cupcakes to be found at Walt Disney World. The brownie cupcake at Erin McKenna’s Bakery NYC gets special mention here because of what it doesn’t have. The items sold in the bakery are gluten-free, kosher, and vegan. You won’t think that anything is missing. The Brownie Cupcake is dense and has small chocolate chips throughout. The chocolate frosting will melt in your mouth. Erin McKenna’s Bakery NYC isn’t just for people who are looking to avoid certain ingredients. It’s for anyone with a sweet tooth.

Of course a name like Ghirardelli that is synonymous with rich chocolate has to be on this list! First go to the Ghirardelli Chocolate Shop and try a free sample. You might want to make a purchase as well. Then head next door to the Ghirardelli Ice Cream Shop. Most of the selections feature chocolate in one form or another. If you love dark chocolate, the Midnight Reverie Sundae is what you’ll want to order. It’s made of chocolate ice cream, dark chocolate hot fudge, semi-sweet chips, and an Intense Dark Twilight Delight 72% Chocolate. Of course there’s also whipped cream on the top. Midnight Reverie will have you dreaming of dark chocolate for months to come. You can find ice cream sandwiches in plenty of places at Walt Disney World. What makes the offering at L’Artisan des Glaces different is the cookie. Instead of using a chocolate chip cookie, chocolate ice cream is placed between two chocolate macarons. The ice cream at L’Artisan des Glaces is made the French way, which has a different consistency than American ice cream. You’ll be thinking about ordering another Chocolate Macaron before you finish your first one, they’re that good.

The Kitchen Sink is a sundae that is meant to be shared, so grab three chocolate loving friends and head over to Beaches & Cream Soda Shop. The Chocolate Lovers Version of the Kitchen Sink includes two scoops each of vanilla and chocolate ice cream, as well as four scoops of cookies and cream. That is topped with a brownie, several Oreos, two Milky Ways, chocolate sauce, chocolate chips, chocolate sprinkles, and chocolate shavings. It’s still topped with an entire can of whipped cream and served in a kitchen sink. If you’re looking for Walt Disney World’s most filling chocolate treat, look no further. If you love the flavor combination of chocolate and coffee, you’ll want to head to Disney’s Animal Kingdom Lodge on a hunt for Zebra Domes! Also known as Zebra Cupcakes, these treats are rich and full of flavor. You’ll taste white chocolate, dark chocolate, espresso, Amarula Liquor, and a host of other flavors. Zebra Domes may be small in size, but not in flavor. The Ganachery, The Landing, Disney Springs

There are no wrong choices at The Ganachery. You’ll be drawn in by the smell alone. You can watch as chocolate is being made, and if you have any questions, ask a chocolatier. Flavors range from familiar such as vanilla to more exotic like chipotle pepper. You can buy individual pieces, or have a box put together for you. There are other choices as well. Your first visit to The Ganachery will not be your last.

The Mickey Premium Ice Cream Bar might be the most iconic treat at Walt Disney World. It is as cute as it is tasty. The idea is simple, vanilla ice cream in the shape of the mouse who started it all is covered with chocolate and served on a stick. It is a must-have treat for many families while at Walt Disney World. Mickey Premium Ice Cream Bars are affordable, at least compared to other snacks. You also don’t have to go far to find one. They are sold at many counter service restaurants, in stores, and at kiosks. On a hot day a portable stand might suddenly appear near a popular ride if there’s a long line. Mickey Premium Ice Cream Bars may not be the most decadent chocolate treat at Walt Disney World, but they are certainly one of the most popular.

2016-07-25
PaulaK
Previous: 12 Things We Love About The My Disney Experience App
Next: 10 Insider Tips For Getting The Most Out Of Rides At Walt Disney World