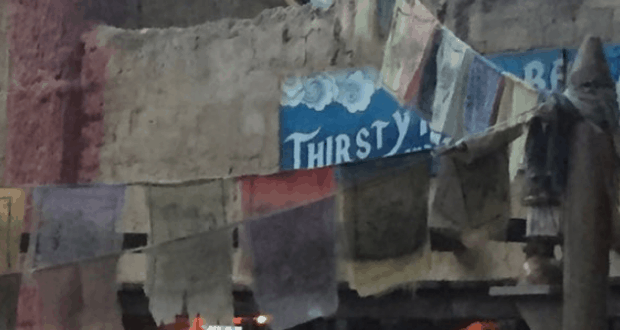 Several fan sites are tweeting that Animal Kingdom is about to get a new bar.

They even captured a glimpse of the sign. This is part of the enormous expansion of the Animal Kingdom theme park.

Back in August, at the 2015 D23 Expo, Disney revealed the name of the new AVATAR-themed land and one of its attractions. Now they are releasing more news coming out of D23 Expo Japan, where Bob Chapek, Chairman of Walt Disney Parks and Resorts, shared more about the expansion.

Pandora – The World of AVATAR will bring a variety of new experiences to the Park, including a family-friendly attraction called Na’vi River Journey.

The adventure begins as guests set out in canoes and venture down a mysterious, sacred river hidden within the bioluminescent rainforest.

The full beauty of Pandora reveals itself as the canoes pass by exotic glowing plants and amazing creatures. The journey culminates in an encounter with a Na’vi shaman, who has a deep connection to the life force of Pandora and sends positive energy out into the forest through her music.

Na’vi River Journey will open with Pandora – The World of AVATAR in 2017.

According to Yahoo news James Cameron is recently let fans in on some additional details about the Avatar expansion in Disney’ Animal Kingdom Park in Florida.

Cameron was quoted, “It’s going to have floating mountains. It’s pretty cool,” says Cameron of “Pandora: The Land of Avatar,” a new theme park area due to open at Florida’s Walt Disney World in 2017.

That park name seems to come directly from Cameron.  He was speaking at the Hero Complex Film Festival and took the time to release the name and more details about the Animal Kingdom expansion project.

“It’s a land within the park but a land is not just a ride. There will be several rides and a number of other attractions. It’s really just a place you’re gonna wanna go and hang out,” the director said, as reported by SlashFilm.

Please tell us what you think in the comments below or on Facebook. 2015-11-21
David
Previous: 10 Things To See, Do, Explore, And Eat In Walt Disney World Resorts
Next: 5 Secrets In Disney’s Animal Kingdom