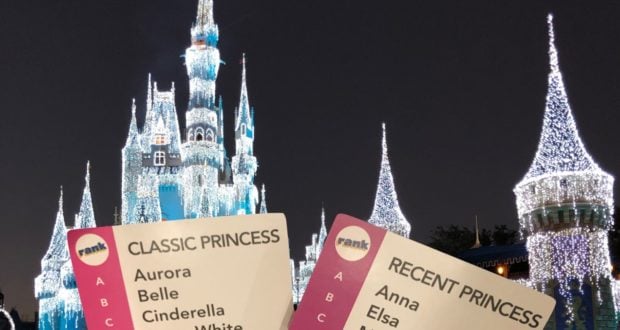 Every Disney lover has a favorite Disney Princess. Most have more than one. Some prefer the princesses from Walt Disney’s original trilogy and other classic Disney animated features, such as Snow White, Cinderella and Aurora. These characters are wonderful role models for young women, with their warmness and kindness.

Others are more passionate about contemporary princesses from more recent Disney films, such as Anna, Elsa, Moana or Rapunzel. Because of the cultural change over decades, these more contemporary characters are more independent and empowered by their own resourcefulness rather and relying less on other characters.

Neither type of character is better than the other necessarily, and all these characters share strong, positive character attributes regardless of the era in which they were made and introduced to audiences around the world. They all possess immense courage, care and concern for others.

Here, we’ll alphabetically list eight of the most popular Disney princesses—four classic princesses, and four recent princesses—with a short descriptor of what each character embodies. Then, let’s see your ranking of them!

Aurora made her debut in Walt Disney’s Sleeping Beauty in 1959. As the daughter in a royal family, she lives a protective life, closely guarded to prevent a curse from the evil Maleficent. Aurora’s naivety allows her to mistakenly prick her finger on a spinning wheel with dire consequences. She relies on fairies to help her, and ultimately a prince she met in the woods helps save her kingdom, and they live happily ever after.

Belle made her debut in Beauty and the Beast in 1991. A bookworm living in a small, quiet French village lives vicariously through books as she longs for adventure. When her father vanishes, she heads out into the woods to find him. Discovering a frightening Beast, but she holds her ground and engages him. She becomes a prisoner in his castle, but makes the best of it by reading the countless books in his massive library. Belle befriends the Beast’s enchanted furnishings which turn out to be his faithful servants, when she breaks a spell, turning the enchanted furnishings back into humans and turning the Beast back into the Prince he always was. They live happily ever after.

Cinderella made her debut in Cinderella in 1950. Stuck in a life of indentured servitude to her Stepmother and Stepsisters, Cinderella is essentially a maid who must clean and cook for the others without enjoying any normal benefits of being in a family. Yet, she is kind-hearted and happy, enjoying the daily routines by singing with cute animals such as mice. Despite her mean Stepmother and Stepsisters efforts to keep her at home, she meets a Fairy Godmother and is able to attend a ball for a chance to be the Prince’s wife (if she fits the glass slipper). She ultimately gets the Prince through the help of her Fairy Godmother, her animal friends and the magic glass slipper.

Snow White made her debut in Snow White and the Seven Dwarves in 1937. She was the first Disney princess ever! Snow White’s wicked stepmother pushed her out of her home where became lost in the woods. She made a new home with seven dwarves who gave her company as they cared for one another. Snow White becomes tricked by an old woman and falls into a sleeping curse, but as the “fairest of them all,” she becomes saved by a kiss by a Prince.

Anna made her debut in Frozen in 2013. As the little sister of Elsa, she is spirited, optimistic and courageous. But she is naive and innocent, compared to her sister, believing that others, including her sister, will do good and thus being let down when they don’t. Anna believes in the “love at first sight” attitude of early Disney princesses, but in Frozen, Anna learns her “knight in shining armor” is actually the villain. She believes the best in her sister Elsa, and pursues her on a quest to use Elsa’s “frozen” powers to restore their kingdom from the long winter caused by Elsa. It is this sisterly bond that solves the kingdom’s problems. They need each other to do good.

Elsa is the cynical sister of Anna in 2013’s Frozen. Elsa possesses an ability to freeze anything, and uses these powers to make herself an ice palace, but at the expense of putting their entire kingdom into a long winter. Elsa accidentally freezes her own sister, Anna, which she realizes she must control her power and allow her sister (and others) to have time and space to contribute to their society. This also helps her sister Anna discover the love of her life.

Moana debuted in the movie Moana in 2016. She is the daughter of the chief of her tribe, set to some day inherit their land, but she looks to the sea longingly, wanting a life of adventure. Her elders feel she must be content, but she wants to protect their land from endangerment. She sets sail to discover a demigod to help her with this mission. She discovers that the goddess is also the villain—the same person with their happiness stolen. She saves her land by her own initiative and resolve.

Rapunzel — made her debut in Tangled in 2010. She is the classic character from this classic story that seemingly would be an inexperienced damsel in distress, spending all her days and nights locked in a tower, being told by her wicked mother not to trust anyone. However, she uses her long hair, and her artistic signing and athletic abilities to lead others. She finds her real parents and revives the love of her life, all due to her own efforts.

Now that you’ve had a brief refresher on four classic Disney princesses and four recent Disney princesses, now it’s your turn to rank them in your favorite order. Share your rank on social media and tag @therankgame, and you could win a copy of THE RANK GAME, the game about you and your friends and family—and the thinks you like (and don’t). You can get THE RANK GAME on Kickstarter at this link.

ABOUT CHIP & DANA BROWN: Dana Brown, a former Walt Disney Imagineer, is the inventor of THE RANK GAME, which she created with her husband Chip Brown, a former producer at Disney Studios, in the Motion Picture Group’s Feature Animation Division and Disney on Broadway.