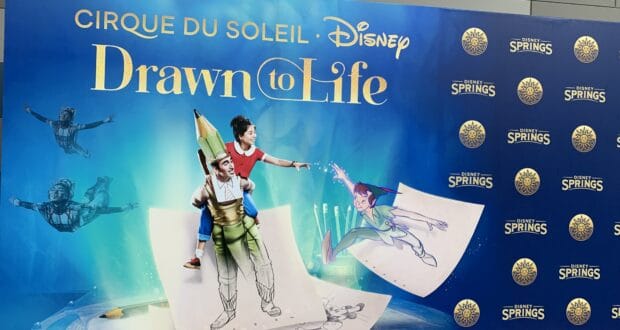 The Premiere of ‘Drawn to Life’ at Disney Springs

‘La Nouba’ was a much loved Cirque du Soleil show at Disney Springs, but many Guests wished that it had more of a Disney-feel. The show ran for 18 years, and closed on the final day of 2017. The building remained vacant for a while but then a new show, ‘Drawn to Life by Cirque du Soleil’, was announced. 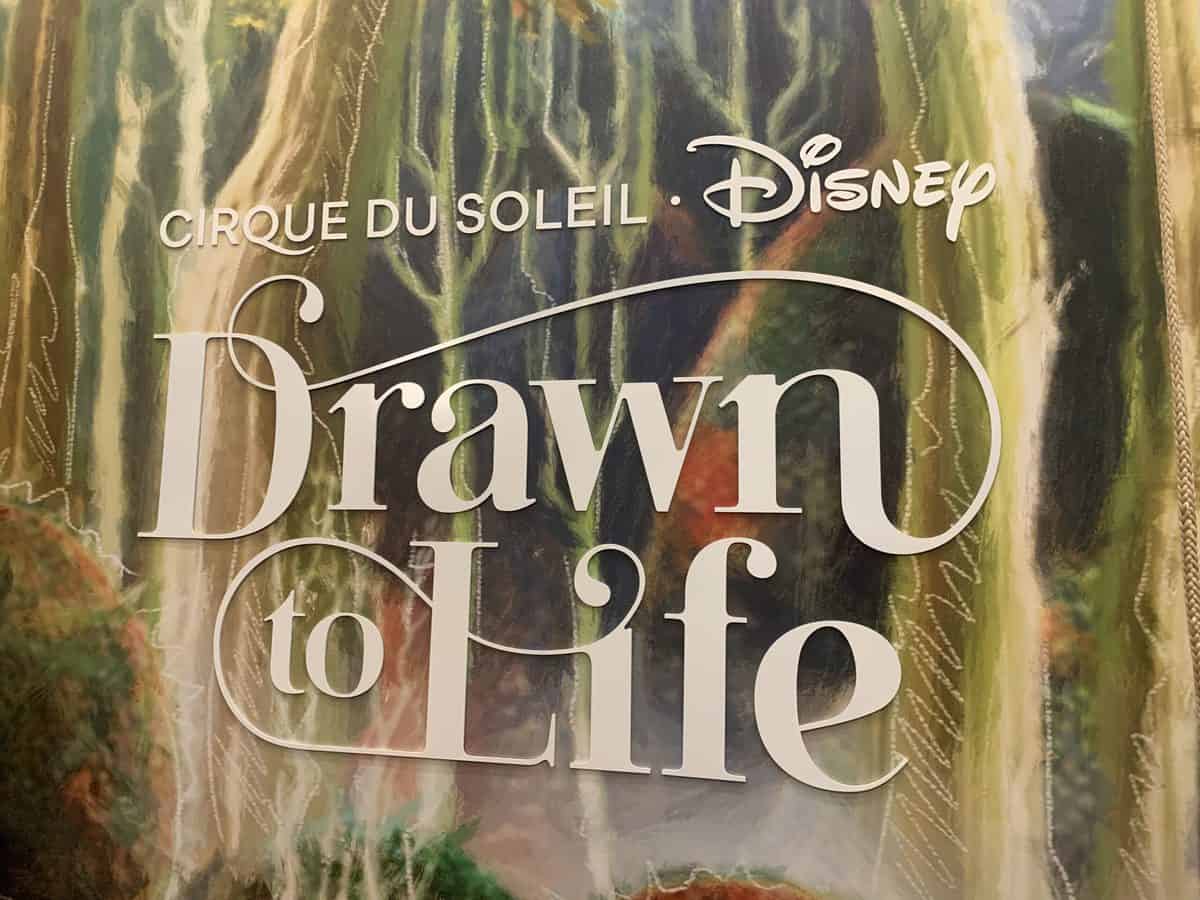 We were told that ‘Drawn to Life’ would be everything that Guests were hoping for. It would feature the mind-blowing acrobatic and comedic performances that Cirque du Soleil is known for, but there would also be a tie-in to some of the classic Disney stories.

‘Drawn to Life’ was supposed to start previews on March 20, 2020, and officially begin its run less than a month later, on April 17. COVID-19 had other plans.

I was part of a media preview before the Walt Disney World closure. We were treated to the first act, and I could not wait to see the full show! 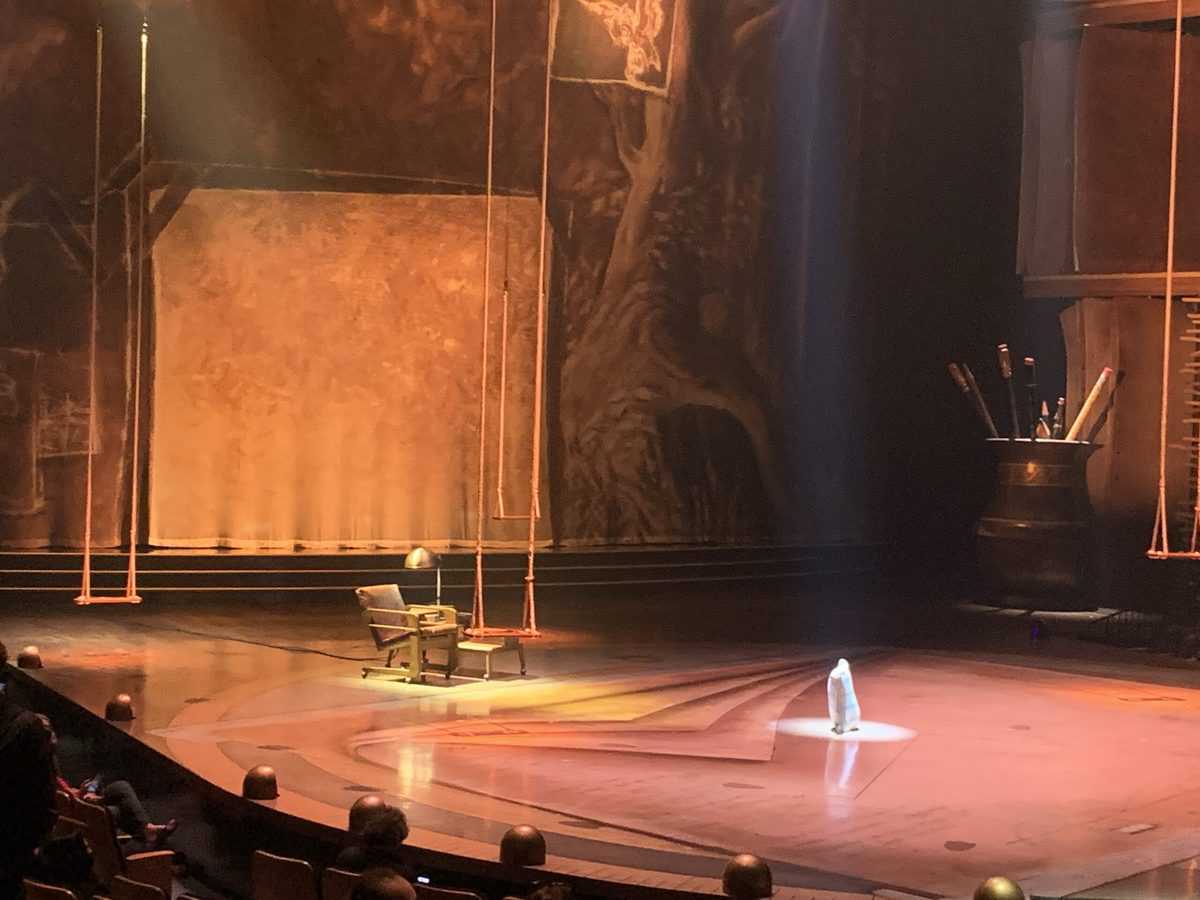 Fast forward to November 18, 2021. ‘Drawn to Life’ has finally opened at Disney Springs. My daughter and I were hosted by Disney for the 5:30 show, and it was even better than I expected it to be.

You are not allowed to take pictures or videos during the show. This is for the safety of the performers. Also, face coverings are still required indoors at Walt Disney World. This includes during the performance. 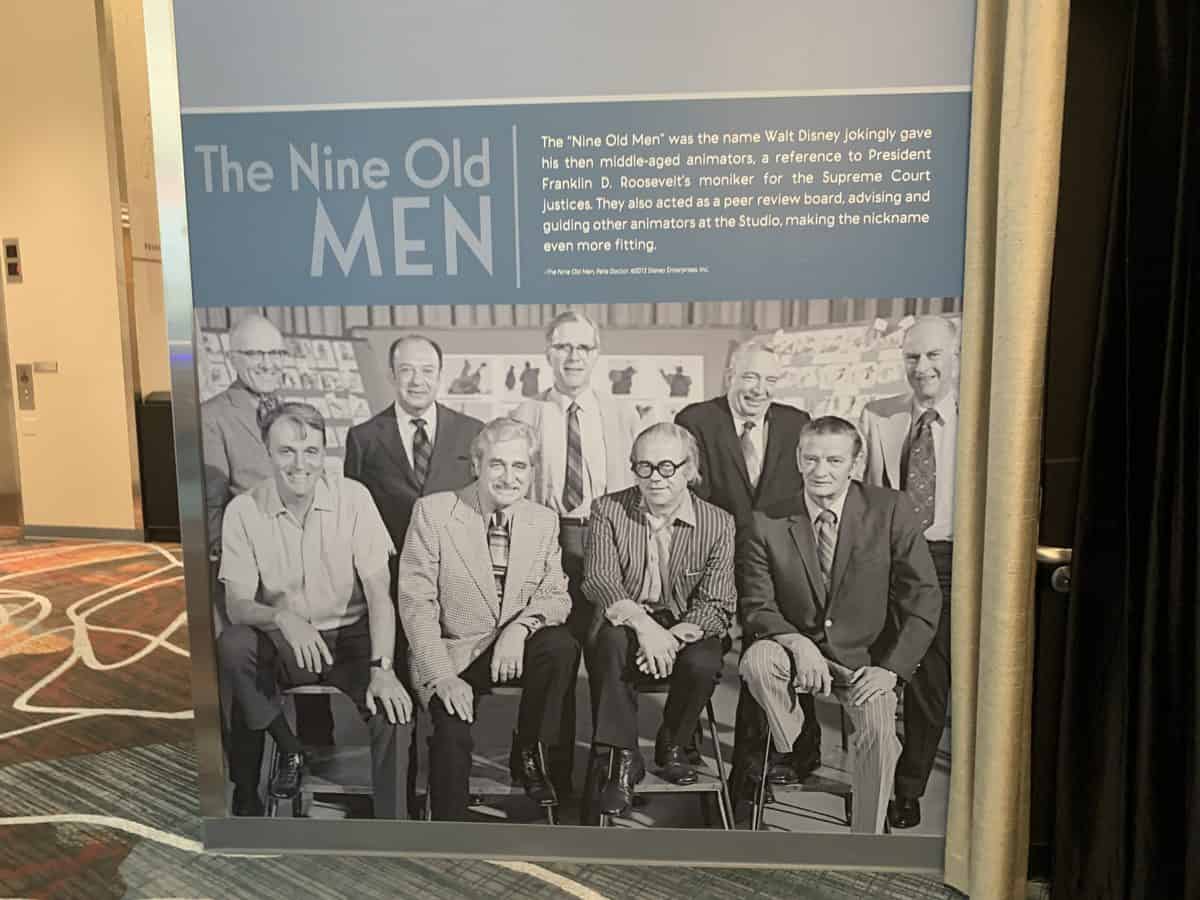 Inside the theater the walls are covered with information on animation. Some of the Principles of Animation are explained, and there are drawings of classic Disney characters. There is also a picture of the “Nine Old Men”; a name that Walt Disney gave to a group of animators back when FDR was president.

Before the performance some of the members of the cast came out and entertained the audience. We were allowed to take pictures during the preshow. Several children were invited up on the stage to draw, and then their pictures were shown on a screen to the audience. 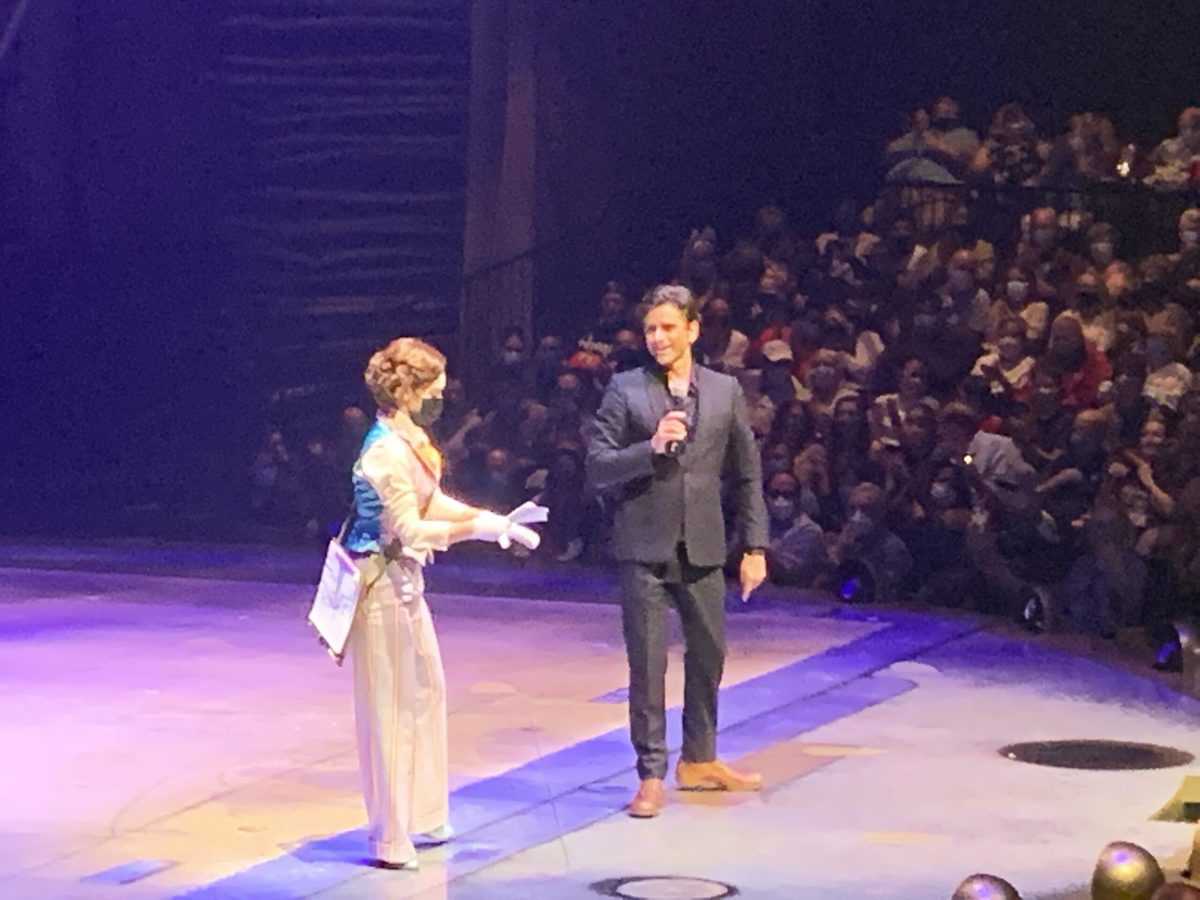 Actor John Stamos was on hand to give the introduction. He was followed by Jeff Vahle, President of Walt Disney World. Daniel Lamarre, CEO of Cirque du Soleil, welcomed the sold out crowd as well. It was obvious that he was thrilled that ‘Drawn to Life’ was finally opening. 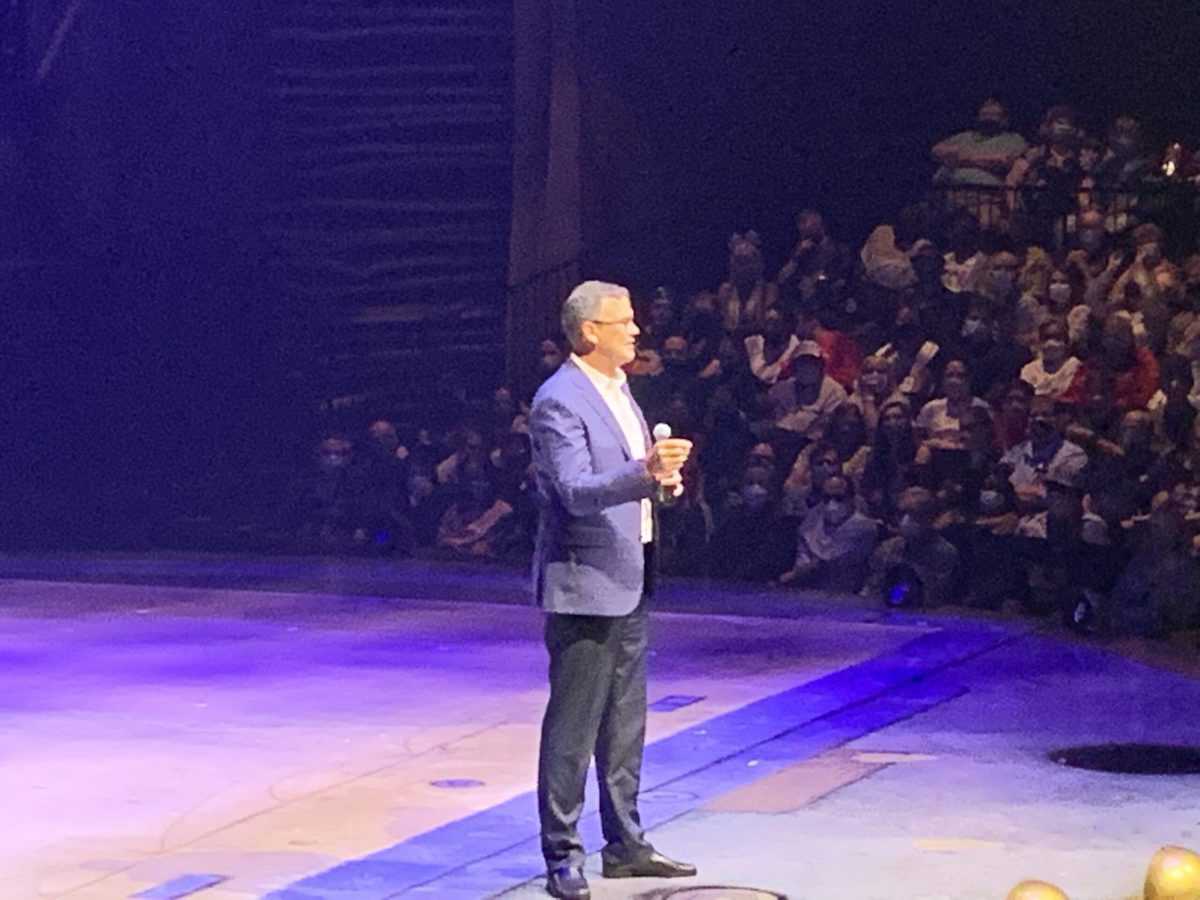 ‘Drawn to Life’ tells the story of a young girl named Julie. Her father was an animator, and he recently passed away. He left her a letter with instructions to head to his desk. There, she learned that he had left his final project unfinished, because he wanted her to do it. 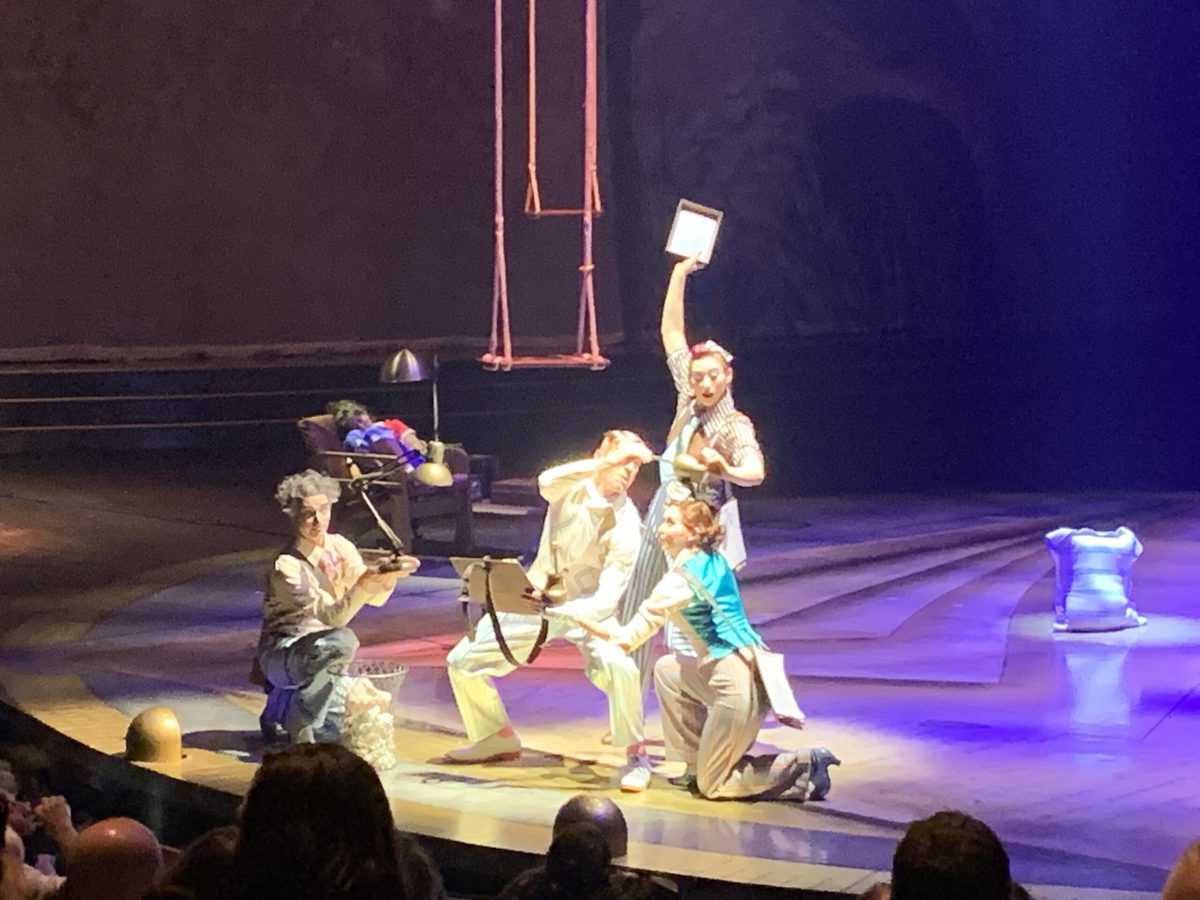 Julie has an active imagination. With the help of her father’s favorite pencil (Mr. Pencil), she contemplates what she needs to do to complete her father’s work. 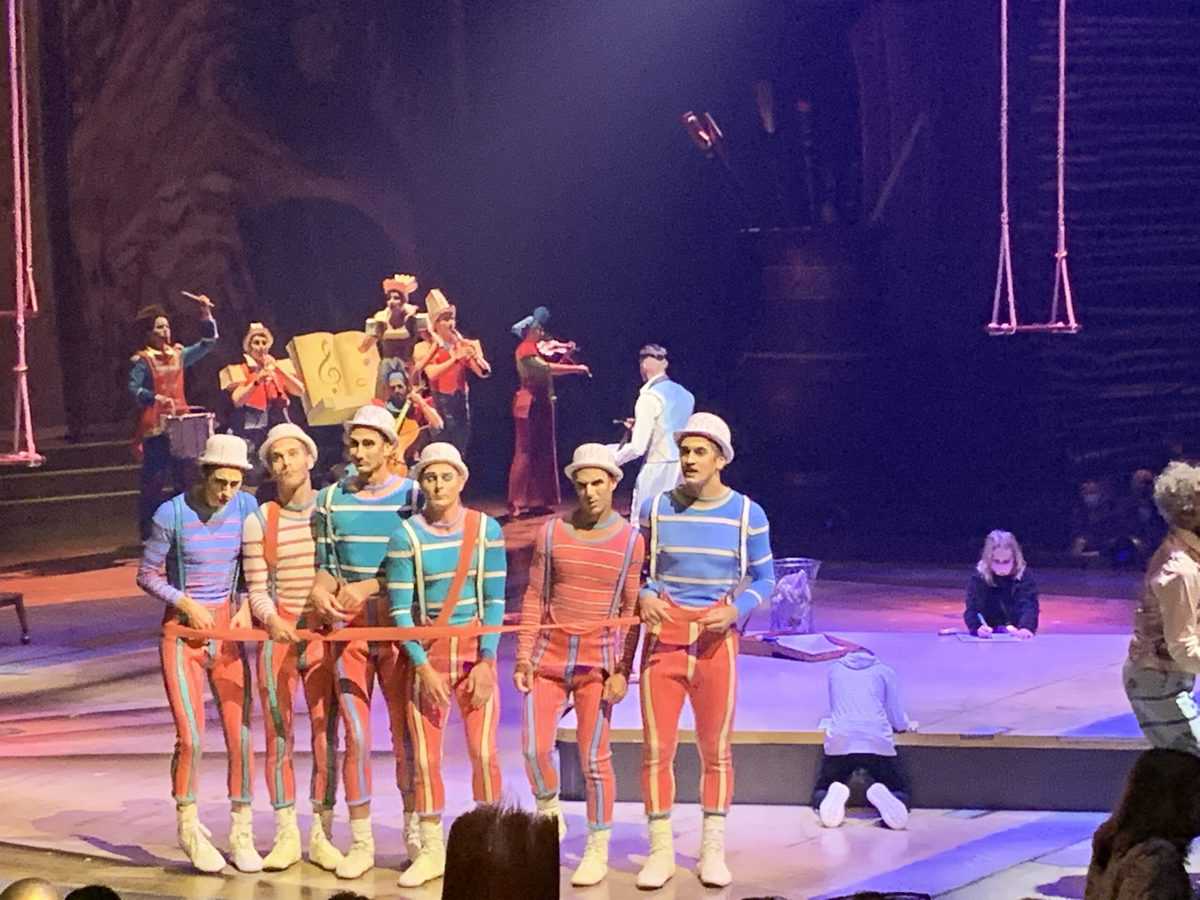 Every good story needs a villain, and the baddie in ‘Drawn to Life’ is one of the most unique villains I’ve ever seen. It’s a walking ball of trashed paper.

The character tries to discourage Julie and to steal her sketchpad, and at one point reads a book entitled something along the lines of ‘How to Be a Villain in 12 Easy Steps’. It’s so silly that it’s brilliant.

The story is secondary in ‘Drawn to Life’. It is first and foremost a Cirque du Soleil show. It features incredible feats that will leave you wondering how they are even possible. There is also plenty of comedy.

The tie-ins to Disney aren’t a main feature of the story, they’re more of a backdrop. There is beautiful animation from dozens of Disney classics. Most of the animation is more sketches than the final projects that you already know and love, but the stories are unmistakable. 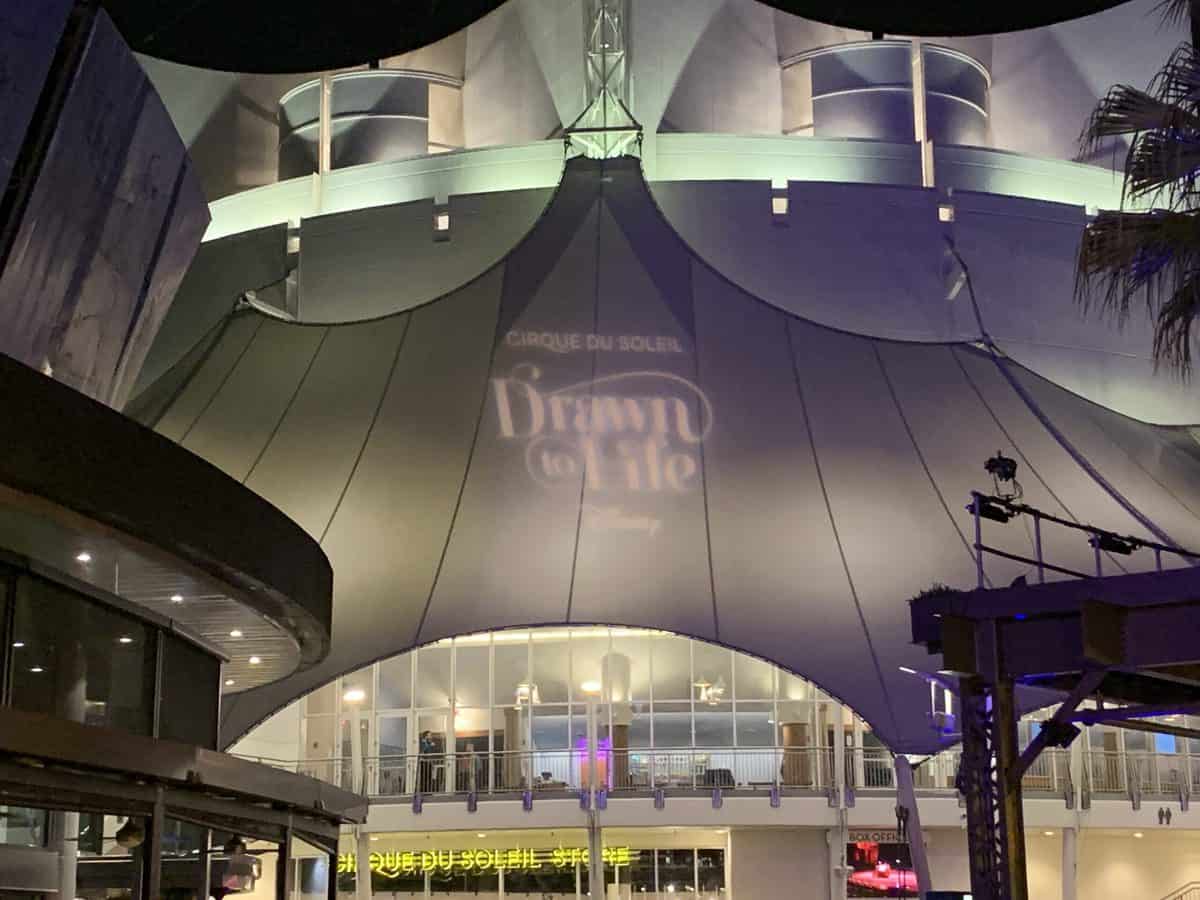 A lot of the music weaves in themes from classic Disney songs. Sometimes it’s a short snippet, at other times it’s a good chunk of the song. We were told unofficially that Disney is working on putting together the soundtrack for ‘Drawn to Life’ and that it will eventually be for sale.

So much takes place during ‘Drawn to Life’ that at times you don’t even know where to look. The acts are hard to describe. There are fairies who jump rope on unicycles, giant elastic bands, an amazing juggler, a pillow, swings, a seesaw, acts of strength, and the highest stilts that I have ever seen. There’s little dialog, but it isn’t really needed.

The costumes and the sets are stunning as well. The mat that is used to keep the performers safe is designed to look like pages from an animator’s sketchpad. That’s how much detail there is. 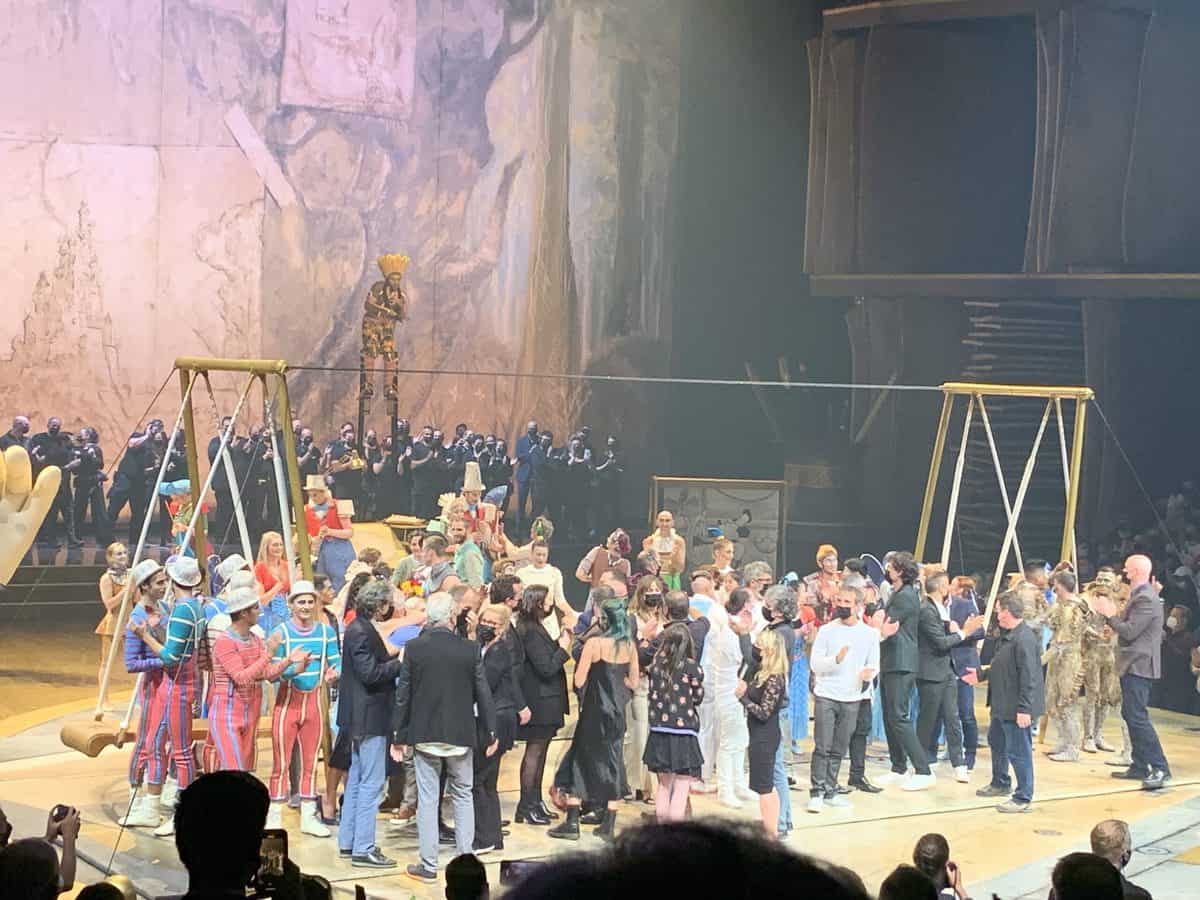 ‘Drawn to Life’ lasts about 90 minutes, and there is no intermission. It may have taken a while to open, but this is one show that was worth the wait! I cannot recommend it highly enough.

If you want to experience ‘Drawn to Life’ for yourself, there are two shows most evenings. It is closed on Sundays and Mondays. Tickets start at $85, and there’s not a bad seat in the theater. You can buy tickets here.