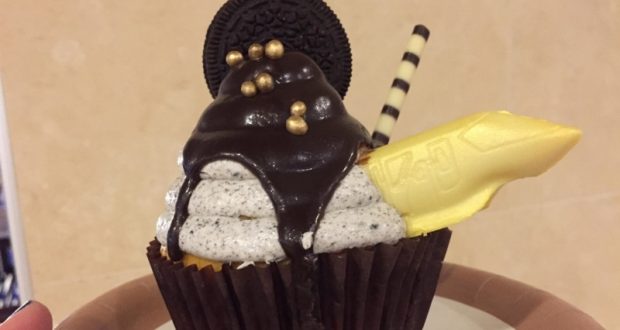 Resort hopping is one of our favorite activities to do in Walt Disney World outside of the parks – the fact that it’s completely free makes it even better!  The Walt Disney World Monorail System makes it a breeze to quickly travel from one deluxe resort on the line to the next, and we love checking out the ambience, food and specialty souvenirs offered by each.  Luckily, if you have a sweet tooth, there are a variety of fun surprises along the way!  So today, we bring you our Monorail Resorts Dessert Crawl, featuring offerings from WDW’s Contemporary, Polynesian, and Grand Floridian resorts.

First up, we arrive at Walt Disney World’s Contemporary Resort.  Waste no time and head to the quick service restaurant Contempo Café to indulge in one – or several – of their famous gourmet cupcakes.  They’re large enough that you can even buy a few and split them among the people in your party to sample as many flavors as possible.  Selection varies – though we’ve never met a cupcake here we didn’t like – but a recent addition that’s proving a hit is the Monorail Cupcake, complete with loads of cookies and cream frosting, an Oreo, and even a white chocolate miniature monorail.

Once your taste buds are stimulated, head on to the Wave…of American Flavors for the Chocolate Flight.  If you’re like us, you have a hard time choosing a dessert among the numerous options Walt Disney World provides.  If so, this is a perfect solution!  The Chocolate Flight is a trio of miniature desserts that allows you to sample several treats without having to choose!  When we dined, the trio included a German Chocolate Cake with yummy Salted-Caramel Sauce, Chocolate Crème Brulee, and the Wave Chocolate Brownie – with amazing White Chocolate Ice Cream topped with Godiva Chocolate Sauce.  Yum!

The next stop on our whirlwind dessert crawl is Walt Disney World’s Polynesian Resort, where we say Aloha! to Te Fiti’s Island Mousse, at Kona Café.  This suitably tropical delicacy is loaded with one of our favorite combos: passionfruit and coconut.  It’s also accompanied by pineapple, as well as refreshing sorbet.  If you’re looking for a light dessert that packs a fruit-filled punch, this is it!

Next, we’re off to the nearby Tambu Lounge for a dessert that really deserves a spot on every best-of dessert list for WDW, in our opinion.  If you haven’t yet had the pleasure, get ready to be blown away by the ‘Ohana Bread Pudding!  It’s a rich, comforting pineapple bread pudding, which in itself would be drool-worthy.  But it’s also accompanied by an exquisite banana-caramel sauce that you pour yourself (we won’t judge if you lick the container), and a dollop of ice cream that melts into a deliciously gooey mess.  Words really don’t do it justice. Our next dessert enjoys cult status among Walt Disney World guests, so if you haven’t tried it, you’ve probably heard of it.  The Dole Whip is only available in one place outside of Aloha Isle in the Magic Kingdom, and this is it!  Pineapple Lanai at the Polynesian Resort carries this beauty – a dairy-free, pineapple-flavored soft serve treat that is also available as a float, over pineapple juice.  If you’re thinking, “What’s the big deal? It’s just ice cream”, then you’re in for a most excellent surprise. All aboard the monorail for our final destination, Walt Disney World’s flagship resort, the Grand Floridian Resort and Spa.  Our first stop is the table service restaurant Grand Floridian Café, where you can indulge in some decadent Chocolate Fondue.  As delicious as it is fun to eat, this dessert comes with fresh fruit for dipping, as well as marshmallows and angel food cake.

Next up is a dessert that has guests raving and calling it the best cheesecake on property, and you’ll find it at Narcoossee’s at the Grand Floridian.  It’s the Almond-Crusted Cheesecake, and it’s a true Italian-style cheesecake covered in almonds, and served with signature Lambert Cherry Sauce and, of course, whipped cream.  It’s topped off with gracefully curving spires of chocolate.  It’s a feast for the eyes and your tastebuds!

The final dessert in our Monorail Resort Dessert Crawl is an edible version of Cinderella’s famous glass slipper, and it can be enjoyed at table service restaurants at the Grand Floridian and Contemporary Resorts.  You’ll have to do a bit of planning first, as it has to be ordered in advanced, but it’s well worth the legwork!  The white chocolate slipper is filled with mousse and comes with raspberries, as well as some pretty fabulous chocolate designs on the plate.  It’s great for special occasions, or just because!