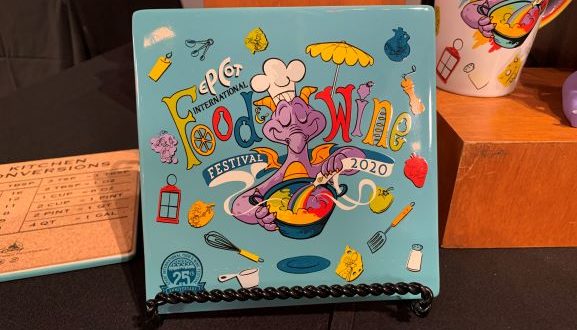 That has changed. On September 1, the Food & Wine Festival merchandise was rolled out throughout Epcot. Like other festivals, you can find the products in special kiosks that are located throughout World Showcase. Much of it is also available in Mouse Gear. The merchandise this year features Chef Figment, Chef Minnie, Taste Your Way Around the World, and Passholder products.

There are some Festival Marketplaces around World Showcase that did not open when Epcot reopened. Until recently, they had “coming soon” markers near the name. As of September 1, those markers have been removed. Plexiglass barriers have been installed by these booths, and there are registers that are covered. Some of the booths have hand sanitizer stations next to them as well. It looks like they could open any day now.

Remember, the current festival is the Taste of Epcot International Food & Wine Festival. It is not the full festival that you’ve experienced in the past. It’s a chance for you to enjoy some special food and drink offerings. It’s scaled back, with no concerts, seminars, or celebrity chefs. This year is the 25th Anniversary of the Food & Wine Festival, and it is the longest festival ever at Epcot. An end date has still not been announced.