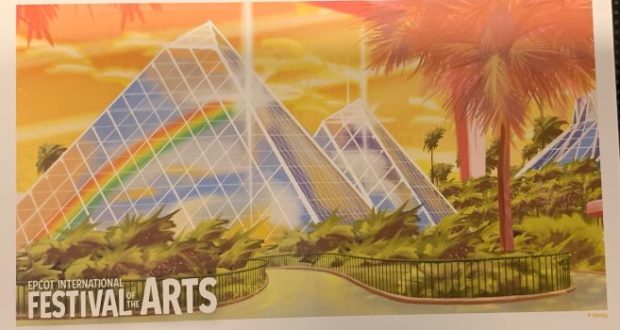 The Epcot International Festival of the Arts does not begin until January 17, but on January 13 I was part of a media group that was given a sneak peek. I enjoy this festival because I have been going since the beginning, and it has grown each year. It’s a lot more laid back than the other Epcot festivals, but it is still packed full of things to do.

Of course Festival of the Arts is not the only thing that will start on January 17. That is also the day that three new films will debut. Our group saw two of them. We started in France. There is a new exhibit outside of the theater. It’s called Tales As Old As Time: French Storytelling on Stage and Screen. It features costumes and props from ballet, theater, cinema, and opera. It’s interesting, and a good way to pass the time while waiting for the theater’s doors to open.

Next we walked over to Canada, where we watched Canada Far and Wide in Circle-Vision 360. This is the third time that the film has been updated. Catherine O’Hara and Eugene Levy now narrate. Some of the elements remain the same, but plenty has been changed. The film covers the five regions of Canada.

We did not see the third new film. Awesome Planet was not quite ready for a public viewing, but it will be ready on Friday. We did learn that the narrator for Awesome Planet is Ty Burrell of Modern Family fame.

Next we started the preview of the Epcot International Festival of the Arts. We saw some of the new merchandise; if you’re a Figment fan you are going to love this! We also sampled some of the foods that will be available only for the festival. Many of your favorites have returned, and there are also plenty of new choices. Food is considered artwork during this festival each year.

There is a lot of live entertainment at Festival of the Arts, and we were treated to some of it. First we got to see artist Trevor Carlton. You need to include watching him in your plans! Carlton will take an almost blank canvas, and turn it into one of your favorite Disney characters in a matter of minutes. It’s a high energy show that should not be missed. I spoke with Carton after his performance. He told me that he will be creating artwork Fridays through Mondays, twice a day. Look in your Festival Passport for Visual Art in Performance.

Next we watched Art Defying Gravity. This is an aerobic show that features feats of strength and agility. This is another show that you do not want to miss. There will be four shows daily, and the times can be found in your Passport.

For many people, the highlight of the Epcot International Festival of the Arts is the Disney on Broadway Concert Series. We saw a performance by Kissy Simmons, Alton Fitzgerald White, Heidi Blickenstaff, and Gavin Lee. Most performances will be duos, but at the end of each rotation the duos will combine for a special performance. The shows will change, depending on who the performers are. Each show will feature music from the musicals that the singers are famous for.

We were able to experience some of the extras that will be at Festival of the Arts this year. One that I really enjoyed was Ink & Paint Animation. It is a class that is taught by Lynn Rippberger, who is an animator who has worked on many Disney classics. We learned about 2D cel animation, and painted a cel of our own! The class will run each Saturday during the festival, and there is an additional fee. The classes do fill up, so call 407-WDW-FEST (407-939-3378) to reserve a spot.

Handimals is another fun extra that we were able to try. You will pick an animal, then make a painted handprint. An artist will then create a picture of the animal, using your handprint as part of it! A single animal can be painted, or maybe you’d like animals representing the entire family in your picture.

Arribas Brothers is another place where you can create a fun souvenir this festival. Jewelry, plates, picture frames, and even nightlights are some of the items that you can decorate. Add your own special touch, and then leave it to dry. You will be able to pick up your creation once it is ready.

The final extra that I tried was Spin Art. With this, you will pick four colors of paint. The canvas will be spun as the colors are added. There are two different ways to spin the canvas. The first is in a motorized box. The second is a little more fun, and requires a bit of help. One person will slowly pedal a bicycle, which will spin the canvas. The other person will then add the paint. You will not get in your full workout, but you will get a whimsical, colorful painting.

There are plenty of favorites that are returning to the Epcot International Festival of the Arts this year. The Living Statues will be back. If you’re a fan a chalk art like I am, that is returning as well. The larger than life paint by number will be operating 11:00 until 5:00 daily, weather permitting. You will have more chances to become part of a famous work of art. These are just a few of the most popular offerings.

The Epcot International Festival of the Arts will run daily from January 17 until February 24. It is included with park admission, although some things will cost extra. If you are a fan of the visual, culinary, or performing arts, you will want to check this out.

2020-01-13
PaulaK
Previous: A Moment for Aunty Kau’i
Next: New Sign for Gusteau’s Restaurant, Just Installed in the France Pavilion at Epcot