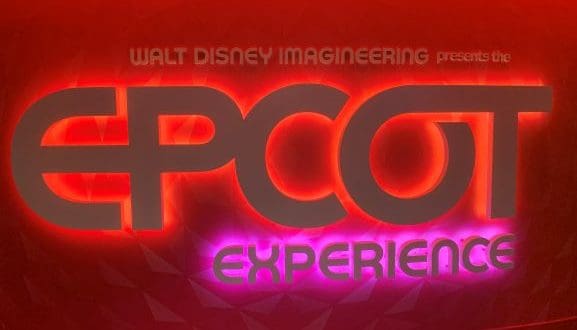 The Epcot Experience and Epcot Forever at Walt Disney World

October 1, 2019 was a big day at Epcot. It was the beginning of two new major experiences. There was also a smaller option that was introduced as part of the Epcot International Food & Wine Festival. I was part of a hosted media group that got to experience it all.

First the new small option. The Donut Box is open! This Global Marketplace sells Sweet Corn Fritters, Strawberry Donut Holes, a Strawberry Smoothie made with Almond Breeze, Boston Cream Donut Ale, and Black and White Coffee Cocktail. The Donut Box is a little bit hard to find if you don’t know where to look. If you’re exiting Test Track, head to the left. You can see the Donut Box from the Odyssey Center. One bit of unconfirmed information that I’d like to share; supposedly the kiosk where the Donut Box is located is the first glimpse of what that part of Epcot will look like once the park’s transformation is complete.

You’re going to want to do more at the Odyssey Center than just look for the Donut Box. Inside is a new exhibit that is officially called Walt Disney Imagineering Presents the Epcot Experience. This is something that you need to see, especially if the construction walls have you a bit down. You will have a chance to see what the future holds for the second Walt Disney World theme park.

The moment you step into the Odyssey Center you will see all kinds of interesting things. The walls are covered with posters of past, present, and future Epcot attractions. There is also a mural that takes up one wall. The mural represents the future of the park. It is striking. There are four fun picture opportunities, each of which has to do with something that is on the way. There is a PhotoPass Photographer on hand at each of the four spots.

After you’ve walked around the perimeter of the exhibit, you need to go into the room in the center. This is where the full Epcot Experience takes place. In the center of the room there is a model of Epcot that is not even close to being true to scale. Spaceship Earth sits proudly in the center of the model. The display is only part of what the Epcot Experience is about. There is also a 360 degree film that plays, and the entire room comes to life. The new experiences that are on the way are highlighted in the film, and the model in the center changes with lights and projections. The film is only about 12 minutes long, but it is packed full of information. I highly recommend that you stop by the next time you are at Epcot, this should be at the top of your must-do list.

The other major new experience is the new fireworks show, Epcot Forever. I’ll admit that it was hard to say goodbye to IllumiNations. The new permanent show, HarmonioUS, will not be ready to open until next year. Instead of leaving Epcot without a fireworks extravaganza, Disney created Epcot Forever. It’s a beautiful show that is heavy on the fireworks and lasers. There are also kites that are unlike any that I have ever seen before. Epcot Forever offers throwbacks to some of the attractions that are no longer around. There was a lot of talk after it was over about how great it was to hear a clip of music from yesteryear once again. The fireworks are shot higher in the sky than IllumiNations fireworks, which means that they will be visible from more places on Walt Disney World property.

There are two things that I’d like to say about Epcot Forever. First, a lot of people have been confused by the addition of the song Whole New World. Many seem to be trying to figure out when Aladdin had a heavy presence in the park. I don’t think that’s why the song is there at all. I think that the “new world” that is being sung about represents the future of Epcot. With so many changes, it’s going to be “a whole new world”. That is nothing official, that’s just my take on why that song was chosen.

The second thing that I would like to say about Epcot Forever is that this show is temporary. This is not meant as the replacement for IllumiNations. A good part of the former show took place in World Showcase Lagoon. From what I’ve heard about HarmonioUS, World Showcase Lagoon will be important in that as well. Epcot Forever takes place primarily in the sky, so that the Imagineers and Cast Members can safely get done what needs to be done in the water over the next few months. Epcot Forever does not take the place of IllumiNations, but it isn’t supposed to. It’s beautiful and it’s unique, and it’s something that you need to see. Don’t compare it to IllumiNations, just enjoy it.

After seeing both the Epcot Experience and Epcot Forever, I am more excited than ever about the future of the park. Sometimes change is hard to accept, but in this case the changes are going to be for the better. Walt Disney himself said, “Disneyland will never be completed. It will continue to grow, as long as there is imagination in the world.” I know that he was talking about Disneyland, but the same idea can be attributed to Walt Disney World. I think that Epcot has a very promising future.