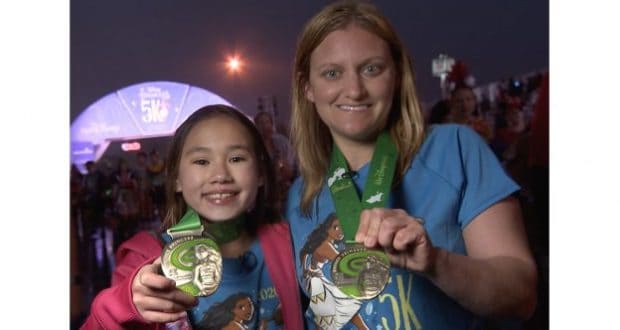 Be prepared to be touched by “the feels”! We love to hear the memorable stories of achievement and happiness that flood out of Disney. You’ll find Hannah’s story to be especially sweet! Check out details below from DisneyParksBlog:

For Erin and Hannah Herman February 21 is affectionately known as the “Hannahversary,” marking 10 years to the day when Erin adopted Hannah from an orphanage in Kazakhstan. It was an extra special day because together they ran the Disney Princess 5K at Walt Disney World even though a decade ago, doctors doubted Hannah would ever walk.

As an infant, Hannah had been left in a maternity hospital in Kazakhstan. She was also born with a severe club foot, and the adoption agency told Erin that it was likely Hannah would never walk. Despite this challenge, Erin brought Hannah back to her hometown of Cincinnati, Ohio where they immediately began treatments including surgery and physical therapy.

More than one year later, at the age of two, Hannah walked for the first time. Since then, Hannah has continued to defy the odds, running and swimming competitively. Her goal is to complete a triathlon and today, Hannah took a step toward that goal by completing the Disney Princess 5K. Hand-in-hand with her mother, who helped rewrite Hannah’s story from her infancy, Hannah conquered all 3.1 magical miles!

2020-02-22
Jamie Sylvester
Previous: What To Know About Epcot’s France Pavilion at Walt Disney World
Next: The “Adventures by Disney” Pins