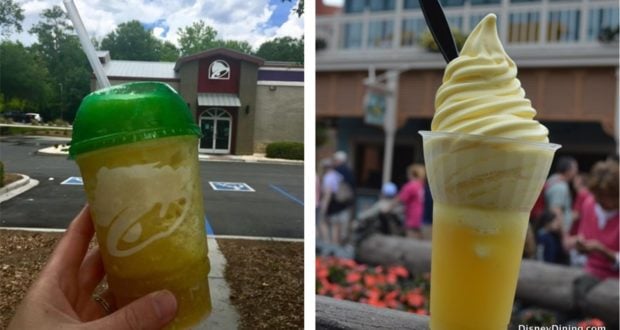 Taco Bell is cooling off the summer with a signature drink called the Pineapple Whip Freeze, and everyone seems to be raving about it! While us Disney fans are stuck at home and unable to tackle the parks until mid-July at the earliest, we’re starting to crave our favorite Disney snacks. Yep – the refreshing Dole Whip is first up on our cravings list! Rumor is Taco Bell’s Pineapple Whip Freeze can curb this Dole Whip craving. True or false? We took to the drive thru to check it out for ourselves.

COST: Taco Bell’s Pineapple Whip Freeze cost us $2.69 for a large but during Taco Bell’s “Happier Hour” between 2-5pm you can get it for just $1.00! Pretty sweet deal. The Pineapple Dole Whip Cup inside Magic Kingdom from Aloha Isle is $4.99.

So, even though you can’t hurry off to Taco Bell to have a Dole Whip, we will say the Pineapple Whip Freeze did have some surprising Dole Whip elements. Even though it’s more like a slushy than the smooth Dole Whip constancy, we did get a creamy ice cream after taste. The sweet pineapple pop is very evident as well. It’s just… well, it’s just… still not a Dole Whip!

If you’re looking for a refreshing pineapple slushy, by all means head on down to Taco Bell! Just don’t expect to taste the yummy Disney treat we’ve all come to love in the popular Disney Dole Whip. First stop when the parks do reopen – Aloha Isle!

2020-05-31
Jamie Sylvester
Previous: The Walt Disney Company Releases a Message to Cast Members in a Time of Unrest
Next: Yummy Jars of “Poor Unfortunate Souls” Recipe