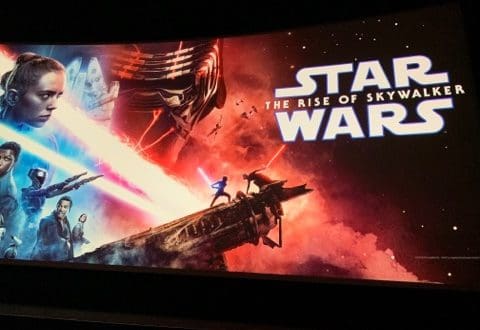 AMC Movies at Disney Springs is always a great place to catch the latest film. When that film is part of the Star Wars franchise, there is an extra layer of excitement in the air. With Star Wars: The Rise of Skywalker being the last Star Wars movie for a while, there was no better place to be for the opening, at least outside of Los Angeles.

I’ve been to the premiere of the last three Star Wars films at Disney Springs. The best part of the premieres is the fans. They come out to show their love for Star Wars, both old and new. There are always fan groups on hand to take pictures with others. Some of the costumes are amazing! The characters are not supplied by Disney at these events. If the sign wasn’t there you would not know that some of the costumes weren’t official. They are that good.

I have been a Star Wars fan since the beginning. I grew up in a small town, and we only had a few movie theaters nearby. I saw what was then Star Wars but is now Episode IV: A New Hope for the first time a couple of months after it was released. I was only 14 at the time, and it did not take me long to get hooked. Star Wars instantly became my favorite movie, and it also was a constant in my life during those awkward teenage years when everything seems like it will be the end of the world. Star Wars was my escape.

My love for a galaxy far, far away has only grown over the years, and it is a love that I have passed on to my daughter. She started with the Special Editions, then grew up on the prequels. She and I were both invited by Disney to attend the premiere, and there was no one who I would rather have shared it with.

The AMC theater was packed, as expected. There was a long line for concessions. I heard someone say that it was estimated at a 40 minute wait, and it would not surprise me if that was true. We decided to skip the popcorn and find our theater.

If you’re looking for a relaxing place to catch a movie while at Walt Disney World, AMC Movies is the place to go. The seats are so comfortable! Another thing that strikes me whenever I go there is how clean it is. Those few theaters that I grew up near were clean, but were never this spotless.

I am not going to give any spoilers for The Rise of Skywalker. My daughter and I both loved it, and it is by far my favorite of the films since Disney bought Lucasfilm. I plan to see it again soon. There is one thing that I will say about the movie that will not give anything away. I was very impressed by how seamlessly General Organa was worked into the story. If I didn’t know better, I would have thought that Carrie Fisher had filmed her part for this movie, not for The Force Awakens. Rest in peace, Princess Leia.

That is the last thing that I am going to say about it. If you are a Star Wars fan and you are currently visiting Walt Disney World, head to Disney Springs to see The Rise of Skywalker. If you aren’t a fan, there are plenty of other movies playing right now. If you aren’t currently in Central Florida, you might want to consider making a movie at Disney Springs a part of your next Walt Disney World vacation. We saw the trailer for Mulan, and it looks really good…