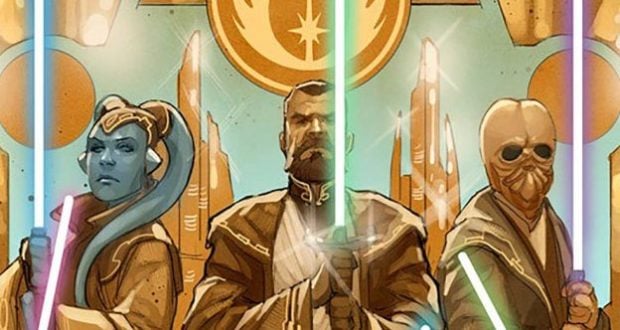 Brace yourselves Star Wars fans! A whole new era of Star Wars storytelling is on the way! What we’ve heard of as code name “Project Luminous”, Disney has revealed as Star Wars: The High Republic. Check out the details and video below from DisneyParksBlog:

Later this year, Disney Publishing Worldwide and Lucasfilm will launch the multi-year publishing program, Star Wars: The High Republic. The program will roll out in phases and explore a time, about 200 years before the events of Star Wars: The Phantom Menace, when the Galactic Republic and the Jedi Order are at their height, serving and protecting the expanding galaxy. But while this may seem like a promising time, something wicked will reveal itself, and we will learn what the Jedi fear.

Through a series of books and comics, you’ll be able to delve into a never-before-explored period of the Star Wars timeline that won’t overlap any of the movies or series currently planned for production. This means more adventures as new characters explore the galaxy, pioneer the Outer Rim, and face new dangers.

This epic new story will be brought to life through several authors, including top-tier names like Claudia Gray, Justina Ireland, Daniel José Older, Cavan Scott, and Charles Soule. So look out for adult and young adult novels, children’s books, and comics from publishers like Disney Lucasfilm Press, Del Rey, IDW Publishing, and Marvel!

Check out all the titles that have been announced so far!

2020-03-08
Jamie Sylvester
Previous: Plant-Based Cookie Fries Recipe from Beaches & Cream Soda Shop
Next: How to Make the Most Out of Your Hollywood Studios Day at Walt Disney World