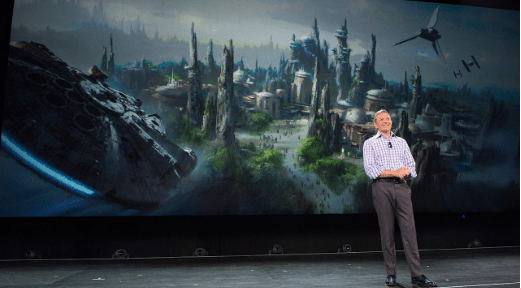 It is a day full of exciting news.  We just learned that Avatar – The World of Pandora is set to open in May of this year.  We also finally got another big question answered:  when Star Wars Land is expected to open.  According to Disney Parks Blog today during the Walt Disney Company Q1 FY17 Earnings call, it was announced that the Star Wars-themed lands at Disneyland in California and Disney’s Hollywood Studios at Walt Disney World would open in 2019!  No more information that that is given about the timeline, but it is nice to know that there is a date that the crews are marching toward.

The Star Wars lands at the parks will be the largest single-themed expansions for Disneyland and Walt Disney World, so this will be a real feat for Disney to accomplish.  The lands are expected to completely transport guests to the Star Wars universe with familiar characters, ships and lands along with themed dining, shopping, costumes, attractions and more.  We can’t wait to get more sneak peeks into this amazing expansion! There is no question that the Star Wars franchise is stronger than ever. Star Wars: The Force Awakens has shattered records and quickly rose to become the biggest movie of all time. Disney, which purchased LucasFilm in 2012, has announced that new films will be released each year at least through 2020. There are also video games, an animated TV show, books, and plenty of merchandise to be found. It was announced in August, 2015 that Star Wars Lands are coming to two Disney Parks. Not too many details were released, including what year the additions are supposed to open. (There’s a rumor that Disney is shooting for Spring, 2019, but there’s no strong evidence to back that up.) Here are seven things that we already know about Star Wars Land. DisneyDining.com will give more details as soon as they become available.

There are going to be two versions of Star Wars Land (which is still a working name). One will be at Disney’s Hollywood Studios in Florida, and the other will be at Disneyland Park in California. It is assumed that the two lands will be almost identical, with similar rides, eateries, and shops. This is good news for Star Wars fans. With two versions available, people who want to visit the new land will have two vacation choices. Although the crowds will be crazy at both parks, with two travel options it might make things a little less insane. There is no word yet on whether or not any of the other Disney Parks worldwide will eventually have a Star Wars Land.

The new lands at both Walt Disney World Resort and at Disneyland Resort are going to be huge. In fact, they will each take up 14 acres. At Disneyland Park the new land will be built just north of Frontierland. The exact location of the land at Disney’s Hollywood Studios is not yet known, but it is expected to take over the Streets of America and possibly more. There have been several closures lately, including the Phineas & Ferb and Cars meet and greets, and more are expected. The Premier Theater is also closed and rumor has it that it will be demolished. Ironically, that’s the theater where several shows were held during Star Wars Weekends through 2014.

5. Based on a New Planet

There are plenty of planets from the movies that could be the base for a Star Wars Land, but Disney has decided to create a new one instead. According to Bob Chapek, Chairman of Walt Disney Parks and Resorts, the new land will take place in a “gateway planet located on the outer rim, full of places and characters familiar and not so familiar”. This will allow guests to put aside any preconceived ideas about what planets like Naboo or Alderaan might look like. It will also help to make sense of where everything is, instead of feeling like a store is too close to the hangar on Tatooine. Since the planet is brand new to Star Wars fans, nothing will feel crammed together or out of place.

The Wizarding World of Harry Potter at Universal Orlando Resort has changed theme park lands. When you enter Diagon Alley or Hogsmeade, you truly feel like you have left the Muggle world behind. The same will be true for Star Wars Land. Every detail will make you feel like you’ve left Earth and are instead visiting a planet in a galaxy far, far away. It will feel familiar to fans of the franchise, but even non-fans will notice the difference. It will be more than just a new theme park land, it will be an experience and destination in its own right.

One of the main things that Star Wars fans have wanted with a new land is a cantina. Star Wars Land will have one. Few details have yet been released about the new eatery. It is not yet known if it will be full service or counter service, and whether or not there will be character meals still remains to be seen. With Star Wars: The Force Awakens there are now two different cantina-type places in the movies. Chances are that the restaurant will not copy either one, but will have some familiar elements. Since it is going to be a new planet, it is a safe bet that it will also be a new cantina.

Two attractions have been announced for Star Wars Land. The first will put guests in the middle of a battle with the First Order. This gives a bit of a clue to the timeline for the new land. The First Order was introduced in Star Wars: The Force Awakens. If the timeline followed the original three movies the battle would have been against the Empire. No other details are yet known about the ride.

Star Wars Land is going to give fans a chance to do something that many of them have dreamed about for decades. The second attraction will allow guests a chance to control the Millennium Falcon. Han Solo’s ship is more than just a vehicle, it’s almost a character. The Millennium Falcon plays an important role in the original three Star Wars movies, and also in Star Wars: The Force Awakens. There was even a cameo shot of it in Star Wars: Episode III – Revenge of the Sith. The Millennium Falcon is the “ship that made the Kessel Run in less than twelve parsecs” and is “the fastest hunk of junk in the galaxy”. Expect long lines for your chance to take the controls