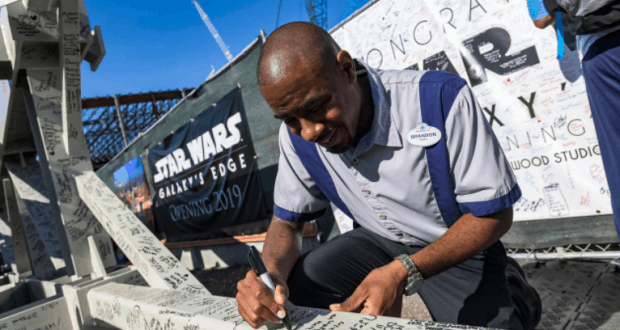 Star Wars: Galaxy’s Edge is currently under construction at Disney’s Hollywood Studios in Walt Disney World.  The Star Wars themed land will be a 14-acre expansion that will incorporate current space within the park as well as areas that were previously used as backstage areas.  This huge transformation will take multiple years to complete and we already can’t wait.  Recently a new construction milestone was reached at the site in Walt Disney World.  Cast members and Imagineers put drawings, signatures and messages on one of the construction beams that will be one of the support beams for the new land. These special touches become a part of the very special history of the attraction.  The beam signings are one of the construction traditions at Disney Parks and a really awesome experience for those that get to participate.

Currently the new themed land, Star Wars: Galaxy’s Edge, is scheduled to open at Disney’s Hollywood Studios and Disneyland park in 2019.  The land will be an immersive experience into the Star Wars universe featuring new attractions, entertainment and dining options that are completely detailed to completely fit in with what you would expect to see in a galaxy far, far away.

Who else can’t wait for Star Wars: Galaxy’s Edge to open?  Check back here for more updates as we have them!

2017-11-15
Christy Caby
Previous: 10 Disney Films That Cheer Me Up On A Bad Day
Next: Walt Disney World to Host M•A•C Snow Ball Event This Weekend