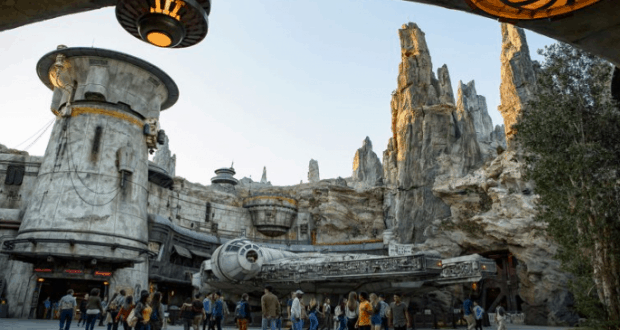 Star Wars: Galaxy’s Edge opens on May 31 at Disneyland Park in California. I’m part of a media group who is hosted to cover the opening. I got to see the new land for the first time yesterday, May 29. I am a lifelong Star Wars fan. My expectations were high, and let me tell you that Disney has exceeded them.

My favorite thing was seeing the Millennium Falcon. Of course riding it is great, but just seeing it blew me away. I knew that it was going to be “lifesized”, but I was still shocked by how big it actually is. I could stare at it all day. I think that’s a good part about what Galaxy’s Edge is all about. While it does not take place on a world that you see in the movies, it fits in perfectly with the whole saga. There are little nods that I never expected. Even the restrooms are themed! The main thing that most people want to know is how cool is Millennium Falcon: Smugglers Run. It’s that cool. When I sat in the cockpit and stared out the window, it was definitely a dream come true. There are three jobs available on each ride; pilot, gunner, and engineer. There are two of each. The ride depends on the pilots, and the two that we had on the ride I was on were not really all that experienced. I was a gunner. It didn’t matter that my pilots didn’t know what they were doing, the ride was still a lot of fun. You are not allowed to pick your position on the ship, it will be assigned to you. No photos were allowed inside the attraction. The audio animatronic for Hondo (who has borrowed the Falcon from Chewbacca) is amazing. If I didn’t know better I would have thought that it was an actor. It is that life like. With Smugglers Run the queue is just as important as the ride. After all, we’ve been dreaming of walking those halls since 1977. The Imagineers reached for the sky and achieved it, it was exactly what I hoped that it would be. Honestly, though, my favorite part of the land was just walking in and seeing the Falcon. I am not the only one who gasped. There was a Villager (Cast Member) near where we entered and he said that he loved the reactions. The rest of the land is beautiful. You do feel as if you are walking through a Star Wars scene. I really liked the Marketplace, because there are small shops that offer different items, from pets to toys. Make sure you get a drink of water from the drinking fountain in the Marketplace. There is a surprise in the pipes! We were able to sample some of the foods that are offered. They may look a bit different, but the tastes are familiar. I will admit that I was a bit disappointed with the blue and green milks.  They taste great, but they are both frozen. The milks in the movies were obviously not frozen, so it didn’t feel like the right experience. Then again, once the land is open in Florida I doubt that I will mind a frozen beverage. One of the most anticipated experiences outside of the rides is Savi’s Workshop. This is where you can build your own lightsaber. It wasn’t open during my preview, at least when I finally found it. After the dedication it was open, but the line was extremely long. This is going to be an attraction in an of itself, so if that’s on your list you might want to queue for that instead of Smugglers Run. I saw some of the lightsabers and they are AMAZING! If you have the time, you love the results.

One word of warning, at least at Disneyland. The WiFi inside Galaxy’s Edge pretty much stinks. I was able to livestream some of what I saw, but only because I had two phones and used one as a hotspot. The Play Disney Parks App features were not available when I was in the new land, but the WiFi won’t be a problem for that. The interactive features on the app use Bluetooth, not WiFi.

Disney promised a land that will make you feel as if you are truly in the Star Wars universe, and they have delivered. From the familiar shapes of the buildings, to the Villagers who are playing a role as well as helping out, to the ships throughout the land, every moment does take you to a galaxy far, far away.