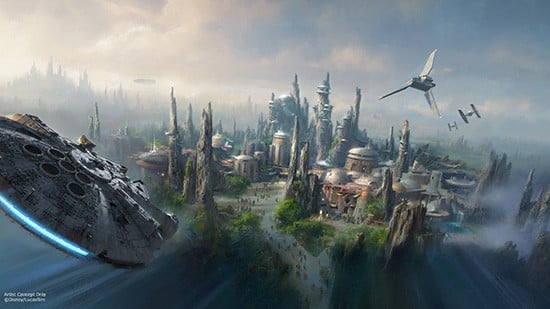 The brand new Star Wars land is officially a reality!

It was announced at the D23 Expo today in Anaheim. AND Will be for both Disney’s Hollywood Studios and Disneyland Park. Covering a massive 14 acres, this will be the largest single themed land expansion in the company’s history.

“We are creating a jaw-dropping new world that represents our largest single themed land expansion ever,” he said. “These new lands at Disneyland and Walt Disney World will transport guests to a whole new Star Wars planet, including an epic Star Wars adventure that puts you in the middle of a climactic battle between the First Order and the Resistance.”

Iger said the new land will be “occupied by many inhabitants; humanoids, aliens and droids … the attraction, the entertainment, everything we create will be part of our storytelling. Nothing will be out of character or stray from the mythology.”

There will be a cantina where fans can “run into all the droids and roaming beasts ‘Star Wars is known for,” including characters from the “Star Wars” saga and “The Force Awakens.”

According to Iger, the land will have two signature attractions, including a ride where fans can take the controls of the Millennium Falcon “on a customized secret mission,” and an experience that drops attendees into “a climactic battle between the First Order and the resistance.”

One themed land will be located at Disneyworld’s Orlando-based “Hollywood Studios” theme park, and the other at Disneyland in Anaheim.

Every store and restaurant will be operated by local inhabitants. Nothing in the land nothing will be out of character.”

He noted that they are “currently casting for roles” to staff the new attractions. The partnership between Disney and Lucasfilm dates back to 1987, when the Star Tours attraction opened at Disneyland

“It’s a great thrill to be here with you, who made this whole thing happen, I couldn’t be happier, thank you so much,” Ford said.

2015-08-15
Rick Killingsworth
Previous: Event Round Up From Day One of The D23 Expo.
Next: Toy Story Land announced for Walt Disney World Theme Parks.