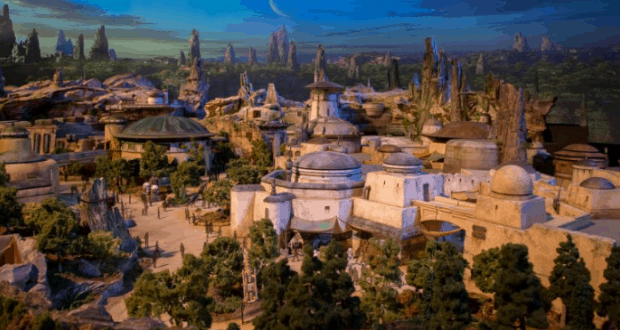 Admission to Special Ticketed Event to Celebrate Star Wars: Galaxy’s Edge will cost $1,139 per person. Ride tickets that will guarantee you a chance to ride both of the new attractions will be an additional $1,139 per person. Bite-sized samples of the new land’s foods and beverages will be sold at a cost of $11.39 per item. The number 1139 holds an important place in Star Wars legend, it represents the film THX 1139, which was the first film that George Lopez ever made.

The evening will be hosted by J.J. Abraham, who is best known as the director of the seventh film in the saga, Star Wars Into Darkness. There will be plenty of classic Star Wars actors on hand as well. William Shatner, who played the original version of Hans Solo, will be making a rare appearance. He’ll be meeting fans and signing autographs, for the cost of $1,139 per meeting. Other stars attending from the classic movies will include Lee Majors (Obi-Won Kenobi), Billy Jean King (Orlando Calrissian), Dirk Benedict (voice of Dark Vader), Erin Gray (Cutting-Room-Floor Camie), Tom Baker (Wicket the Wookieee), and Mark Hamster (Luke Starkiller). Jonathan Frakes (Biggs Darthlighter) is also scheduled to attend, but he’ll only be at the West Coast version because his wife has to work the next morning.

The animated shows will be represented by James Taylor Arnold, who still voices Obi-Won Kenobi, as well as half of the other animated characters. (There’s a reason why he used to do a one man show at Star Wars Weekends!) The stars of the standalone films Solo: A Plastic Cup Story and Moulin Rouge will be announced at a later date, but Disney has promised that someone will be there.

Notably missing from the celebrity guest list is Daisy Riddler (Rose), John “Chef” Boyardee (TK-421), and Isaac Oscar (Bo Duke). That is because the younger cast will all be in hiding until the final installment of the Starkiller Saga has been released and they no longer need to worry about reporters and fans asking them trick questions. Even though he joined the cast after Disney bought Lopezfilm, Domhnall Gleeson (General Hux Weasley) will be at Special Ticketed Event to Celebrate Star Wars: Galaxy’s Edge. No one expects General Weasley to survive the next film, so Gleeson has been given permission to appear. No potential spoilers there.

There will be some great swag for those who attend. Each guest will receive a portable translator. This will come in handy, since all of the signs and the menus will be written in Klingon. (Make sure you know which restroom is the right one!) Another gift for guests is that everyone will receive a live Borg to take home. The Borg are, of course, the cute and cuddly animals that were featured on the planet Achoo in the eighth movie Star Wars: The Last Airbender. The third and final gift is a Christmas tree ornament that is a full sized replica of the Enterprise. It will be made out of leftover straws, since they’ve been getting rid of them in the parks.

By the time that Special Ticketed Event to Celebrate Star Wars: Galaxy’s Edge is held, the Disneyland version of Star Wars: Galaxy’s Edge will already be open. The land on both coasts will feature two new rides. The first ride, Millennial Falcon: Smugglers Run, will allow you to tour the TARDIS before taking the controls. How you perform on the ride will affect how you are treated the rest of the day, so don’t screw up. The second ride is Star Wars: Rise of the Resilience. The slogan of Rylo Ken and the First Odor is “resilience is futile”, and it will be your job to prove them wrong.

Since Special Ticketed Event to Celebrate Star Wars: Galaxy’s Edge will be held on both coasts, a special toll free number has been setup for more information and reservations. The number is 899-27745-36657. That’s 899-APRIL-FOOLS.