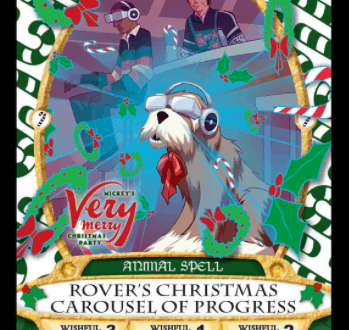 Sorcerers of the Magic Kingdom is a fun, interactive game where guests are able to team up with Merlin in order to help defeat various Disney Villains that are plotting to take over the Magic Kingdom.  There are various magic portals throughout the park where guests can use the special spell cards to ward off a villain attack.  Each of the different spell cards features a Disney character and each one has their own powers to use in the attrack.  Guests are able to pick up complimentary cards and maps from the Firehouse on Main Street, U.S.A.  Guests can also purchase additional cards at various merchandise locations in the park.  The cards are collectible items for many guests and make great souvenirs.

What do you think of the “Rover’s Christmas Carousel of Progress” card?  Who out there plans to get theirs when they attend a party this year?