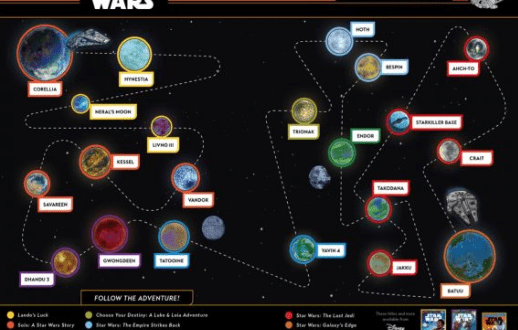 From Disney Parks Blog today, we learned that StarWars.com shared info about a new book called “Star Wars: Pirate’s Price” that will likely interest many of the Star Wars fans out there.  This new book gives a look at the story for the Millennium Falcon going into planet Batuu.  The galactic pirate, Hondo Ohnaka, comes into possession of the Millennium Falcon and is the one that brings her there.  Guests will be able to visit Batuu and the Millennium Falcon for themselves when they visit Star Wars: Galaxy’s Edge.  The new themed land will be opening in 2019 at Disneyland Park (summer) at Disneyland Resort in California and Disney’s Hollywood Studios at Walt Disney World in Florida (fall).   While at one of the locations, you actually may end up in an exciting adventure with Hondo and the Millennium Falcon at the village of Black Spire Outpost while on Batuu.

“Star Wars: Pirate’s Price” by Lou Anders will be released on January 8. You can learn more about Batuu and the upcoming book right now by checking out the excerpt at StarWars.com, and you can also pre-order your copy today!

Who else can’t wait to visit Batuu at Disney Parks?