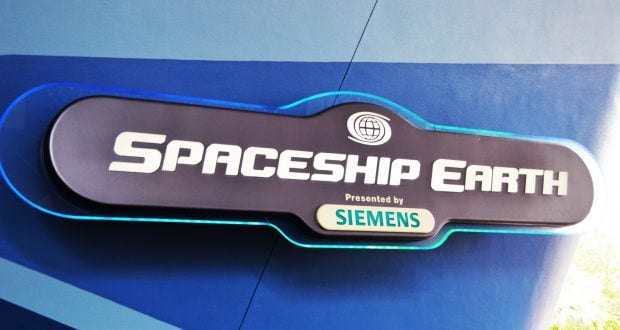 Walt Disney World and Siemens started their partnership back in 2005 via the sponsorship of Spaceship Earth at Epcot.  Spaceship Earth is the amazing, slow-moving attraction that is located within the huge ball which is the main park icon for Epcot.  The attraction takes you on a journey to explain how communication, learning and technology has advanced throughout the centuries.  It looks like the Siemens name has been removed the newest version of the Epcot park map, indicating that the sponsorship has ended.  The Siemens sign is currently still in place at the entrance of Spaceship Earth at the time this was published, but has been removed from the “Project Tomorrow” sign on one of the sides of the attraction where the exit is.  We are unsure if that means that the other signs are in the process of coming down.

There was a major refurbishment completed to Spaceship Earth in 2007 and Siemens provided a lot of the funding for these refurbishments to take place.  There were changes that took place throughout the attraction including the addition of the interactive experience as you are making your descent back to Earth.

Spaceship Earth wasn’t the only attraction that Siemens sponsored.  They also provided sponsorship to Reflections of Earth, an attraction that was at Innoventions in the Future World area of Epcot, as well as The Osborne Family Spectacle of Dancing Lights, a Christmas light display that was at Disney’s Hollywood Studios.

We will let you know as we learn anything more associated with this change.