A robbery that took place at one Disney Park ultimately left Guests, Cast Members, and investigators with more questions than answers, and though it was solved, it’s unknown what became of the person responsible for the crime.

The only bank heist to ever take place at Disneyland happened on August 21, 1960, just five years after Walt’s first park opened to Guests. And the whole thing was a complete mess from its inception to its investigation.

On that warm summer day at Disneyland, 25-year-old Cast Member Richard Lowry was working at the Red Wagon Inn, a restaurant inside the park on Main Street that featured themes from the 1890s and a beautiful stained glass ceiling. Also called the Red Wagon Restaurant, the eatery was located at the front of the park and, per a contract with Disney, served exclusively Swift’s meats and steaks.

In July 1955, an advertisement for the restaurant in a supplement for the Southern California newspapers described the venue as follows:

The Red Wagon Inn is one of several charming eating places in Disneyland. It is resplendent in the elegance of a bygone area reminiscent of the famed eating houses of yesterday. All appointments are authentic mementos of the gay and glamorous 90’s—including the stained glass ceiling, entrance hall, and foyer taken from the St. James home in Los Angeles, one of the West’s most noted old mansions. Atmosphere, however, is not confined to the building alone. The menu itself brings back visions of historic good eating—featuring steaks and chops.

Lowry was charged with taking burlap sacks filled with cash down Main Street, U.S.A. to Disneyland’s bank, which was also situated inside the park.

It was customary in those days for Cast Members working at Disneyland’s restaurants and shops to empty their respective tills and take the funds to the bank. In fact, Disneyland boasted a fully operational bank–complete with a vault, tellers, and full banking services for Guests as well as Cast Members–located just off Main Street, U.S.A., inside the building that today houses the Disneyana store.

That day, as Lowry made his way to the bank, the sacks in his care contained around $10,000, which, when adjusted for inflation, would be approximately $95,000 today. The park was heavy with Sunday crowds as Lowry walked down Main Street to deposit the cash inside the Bank of America. The thoroughfare was packed, yielding the need for Lowry’s careful navigation from point A to point B, but as the Cast Member hurried to the bank, the felt a point in his back from the end of the barrel of a gun.

“Do as you’re told, and you won’t get hurt,” an unknown man said quietly into Lowry’s ear.

Almost immediately, Lowry realized he was being held up by a man holding a gun to his back. Lowry never made it to the bank; instead, the gunman forced the terrified Cast Member into a nearby bathroom, where he took the cash from Lowry and fled on foot, telling Lowry to wait in a stall for five minutes so he could make his getaway.

When Lowry finally left the bathroom, he raced back to the Red Wagon Inn to tell his coworkers and managers that he had been the victim of a robbery and that the man with the gun had relieved him of all of the day’s cash. An investigation was instantly set into motion–an investigation that would quickly prove to turn on the Cast Member.

Because Cast Members were regularly tasked with taking bags of cash down Main Street to Disneyland’s bank, it was also possible that a pro-criminal might have identified this behavior, watched for patterns, and then picked a day to make the most of the vulnerability of a Cast Member in the scenario.

But shortly after investigators with the Anaheim Police Department began their probe into the robbery, they started to question Lowry’s account of what happened at Disneyland that day.

The young man’s story reportedly evolved continually–and not just with better, clearer information each time he told it. Rather, it changed in such a way as to make investigators doubt the validity of the details and, eventually, the validity of Lowry’s story altogether.

When he first recounted the ordeal, Lowry said a lone gunman had been responsible for the very quiet holdup and the ensuing robbery. Later, the would-be witness said there were actually two men involved, and each of them was armed with a knife. Another time, Lowry recounted a threat from the robber, saying that the man who held him up swore to locate Lowry’s grandparents and harm them should Lowry be non-compliant.

In a news post by United Press International, the reporter wrote, “Police officers said Lowry’s story about the robbery was ‘just not a jibe.'”

It was at that time that investigators administered a polygraph test, which Lowry failed, leading the Cast Member to admit that the cash wasn’t stolen, but rather, that it was hidden inside a linen closet at the Red Wagon Inn. The elaborate stories Lowry had told investigators were all fabricated by the Cast Member himself. 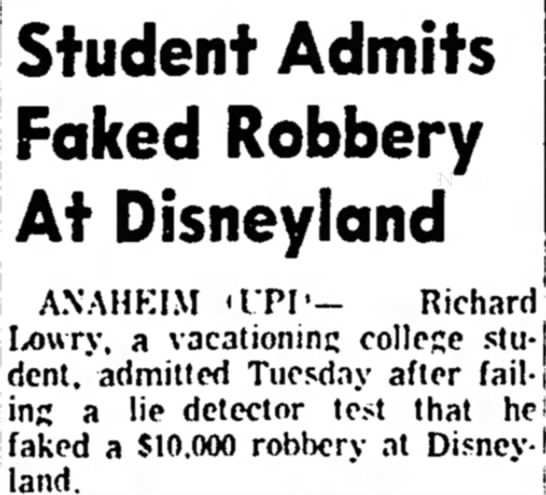 The Los Angeles Times reported that four days after the hoax heist, Lowry was charged with grand theft and was to appear in court for a preliminary hearing the next month. But the story went cold after that point, as there are no available records that detail Lowry’s ultimate fate since Orange County, California’s online court records only date back to the 1980s.

The only bank heist to ever take place at Disneyland was one that never took place at all.

2022-12-06
+Becky Burkett
Previous: Man Who Committed Suicide at Disneyland Posted a Long Explanation on Facebook Hours Before
Next: Another Disney Exec is Gone as Bob Iger Makes Massive Changes