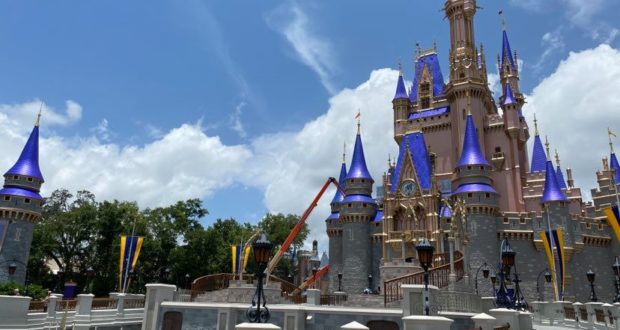 The Magic Kingdom and Disney’s Animal Kingdom both are set to reopen on July 11. Disney offered a sneak peek to Annual Passholders. The dates for the previews were July 9 and 10, and they were available only for those two parks. Spots filled up quickly, since capacity is limited right now. On July 9 my daughter and I attended a Passholder Preview at the Magic Kingdom. We were pretty happy that we were able to grab our spots. This was not a media event, we were not hosted for this.

Since the Orlando area theme parks started to reopen we have been to several of theme. Universal Orlando Resort has done an excellent job of making us feel safe when we were there. SeaWorld Orlando was okay, but a bit lax on enforcing some of the rules. Busch Gardens Tampa was the worst, and I cannot imagine going back there until they get their act together or there is a vaccine. I knew that Disney would do a good job of making guests feel safe. I am pleased to say that I put Walt Disney World in the excellent category as well.

Social distancing begins with parking. Cars were staggered every other car, and then those spots were filled in. I hope that this is something that they decide to keep, because it made it easier to get out of the car. Trams are not running right now, but since capacity is limited it is not a long walk to the Transportation & Ticket Center.

There is a temperature check before bag check. This only takes a moment. If someone registers 100.4 or above, the whole party will be allowed to sit down and cool off for a few minutes. If a second check is failed, then the entire group will not be allowed to enter the park.

I’m not sure what the new procedure is going to be for bag check. They had us go through the metal detector with our stuff in our hands. They never looked in our bags. There were some people who were pulled to the side and they were checking their things. I assume that it was random, like the metal detectors used to be.

Once at the Magic Kingdom you no longer need to scan your finger for entrance. This is a welcome change, because I have never liked touching that thing. A Cast Member scanned our MagicBands, and then we were in. It was fast and easy, even at the beginning of the day.

The update to Cinderella Castle is not yet complete. That said, it is almost done and it looks great. I think that it’s more subtle in person than the pictures show. I know that not everyone is sold on it, but give it a chance.

Face coverings are required for all two years old and older at Walt Disney World. This is not a rule that is going to go away anytime soon. Walt Disney World is located in both Orange and Osceola Counties, and both counties have face covering mandates. The description of what face coverings are acceptable is on the Walt Disney World website. Cast Members did a wonderful job of enforcing the rule. What was nice was that most guests did follow it. It wasn’t until the end of the day that I saw a couple of people who blatantly broke the rule, and someone did say something to them. If a guest pulled the mask down so that their nose was out, they were reminded that they needed to have both nose and mouth covered. Both the Cast Members and the guests were great when it came to face coverings today.

A couple more things about face coverings. You are not allowed to take them off for pictures, even for a few seconds. You can take them off while eating or drinking, or in a Relaxation Station. I recommend the Relaxation Station in the Pete’s Silly Sideshow building. It’s air conditioned, and the tables are spaced apart so that you are not near another party. There are Cast Members at the entrance, making sure that people are following the rules and staying distant. Also, neck gaiters are not allowed, even if they have ear holes. People were not allowed in with only a gaiter, I heard Cast Members inform people of this. There are now disposable face masks for sale in one of the vending machines at the Transportation & Ticket Center, so if someone only had a gaiter they could buy an alternative. There some people were still wearing gaiters in the park, my guess is that they changed once inside. I saw less than ten of them.

The lines for the rides are spaced so that you would not be next to another party. There are markers on the ground to let you know where to stand. Some of the rides like Big Thunder Mountain Railroad also had plexiglass installed to keep a barrier between parties. The glass had “please do not touch” stickers on it, but the panels were still covered with fingerprints. The lines were mostly short.

There is plenty of hand sanitizer to be found. At each ride entry there is an automatic dispenser, there is a second right before you get on the ride, and a third at some point after you get off. One improvement that I would suggest is that the Cast Members should remind guests to use it right before getting on the ride. At Universal they will pump it directly into your hand before you ride. At Disney, we were trusting that the person before us took the precaution. Many people did use it, but not everyone. I hope that this is something that Disney decides to put more emphasis on. A quick “you’re in row 2, and don’t forget the hand sanitizer” is all that it would take.

The rides themselves were staggered so that no two parties were close to each other. This was actually kind of nice, we didn’t have strangers crowded next to us on a ride like Pirates of the Caribbean. The water elements of most rides were turned off. Interactive queues for the rides were not operational or blocked off.

Mobile Ordering is encouraged for food right now. It’s an easy system to use, but we still had to wait when we went to Cosmic Ray’s Starlight Cafe. They had us wait outside until our order was ready. Other forms of payment were accepted, but they told you right away that they would prefer Mobile Ordering. If you didn’t have the My Disney Experience App, there was a QR Code that you could scan to place an order.

Once inside, Cosmic Ray’s was empty. Tables are marked off so that people will not sit too close. There were a couple of Cast Members walking around with bottles of disinfectant to clean the tables the moment that someone left. It felt like a safe environment. The toppings from the bar are gone, but you can still pick up packages of condiments there.

Characters showed up in a few other places as well. The train station on Main Street, U.S.A. often had a few. We were lucky enough to see Anastasia and Drizella on the Fantasyland side of Cinderella Castle. They were having a great time interacting with the people below. We saw Stitch in Tomorrowland and two of the bears in Frontierland. The characters all stayed away from people, but it was still nice to see them.

A special shoutout to the Cast Members. They were incredible! They truly seemed happy to be welcoming guests back. I don’t know how many times someone said “welcome back” or “welcome home” to us. They reminded people to follow the rules, but they did it politely. You could tell that many were smiling under their masks.

What amazed me was how much we did today. The lines were short, I think that the longest that we waited was about 25 minutes. A lot of people left before the 7:00 closing time, which meant that we could walk onto Seven Dwarfs Mine Train three times in the final hour. The last time that we rode we had the train all to ourselves. It may not have been Happily Ever After, but it was still a great way to end a really enjoyable day.