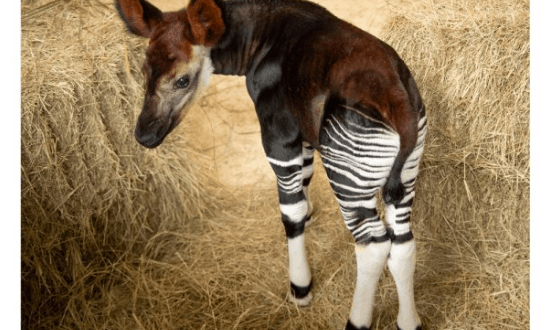 World Okapi Day was on October 18th and Walt Disney World celebrated by rejoicing in the birth of a rare okapi on October 1st, 2018.  The calf and mom reside at Disney’s Animal Kingdom Lodge on property.  The new calf weighed in 54 pounds and was born to mom, Zelda.  The pair have been bonding well and are currently in a backstage area at the resort for the next few months before they officially join the rest of the animals at the resort’s savanna.

Here is a look at the new baby:

The calf’s parents are, Zelda (mom) and Mandazi (dad) were chosen as part of the  Species Survival Plan (SSP), which is overseen by the Association of Zoos and Aquariums (AZA).  This program works to ensure responsible breeding for threatened and endangered species.

Kim Thomson, keeper at Walt Disney World, shared this about the care for a new calf, “We will spend a lot of time conducting observations on mom and calf making sure the calf is bonding well with mom, nursing well and basically hitting all of the milestones we would expect of a growing okapi.”

Okapis are unfortunately an endangered species which is found in rainforests of the Democratic Republic of Congo. They are known as the ghosts of the forest and are very shy, reclusive and rarely encountered in the wild.  They weren’t even discovered until 1901. There are only an estimated 20,000 okapi in the world, and the population is declining due to poaching and loss of natural habitats.

Here is more information on okapi: How cute is this new calf?