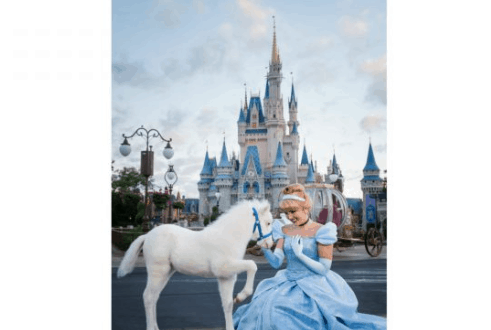 Disney Parks Blog gave a sneak peek at a new adorable addition to Cinderella’s royal family.  The newest Cinderella Pony, Lilly, has joined the family at Walt Disney World.  Lilly is named after Walt Disney’s wife, Lillian.  Lilly was born in march and was the first white Shetland pony ever born at the Tri-Circle-D Ranch located at Disney’s Fort Wilderness Resort & Campground.

Before heading into the weekend, we wanted to share a first photo of an adorable new addition to Cinderella’s royal family –  our newest “Cinderella Pony” named Lilly.  Her mother, “Lady” and father “Ferdinand” are both Shetland Ponies who are also the ponies that pull Cinderella’s iconic pumpkin coach for Disney’s Fairytale Weddings and even some parades at Magic Kingdom Park in Walt Disney World.

Once Lilly turns two she will begin training to also pull Cinderella’s carriage and make her formal debut as part of the team.  The training process takes around a year.  Lilly is currently appearing in the pasture are at the barn in Disney’s Fort Wilderness Resort & Campground for a few hours each day if you want to go and see her. The horses have a team of over 35 ranch hands that help take care of Lilly and the other 90 horses and ponies that live at Walt Disney World.