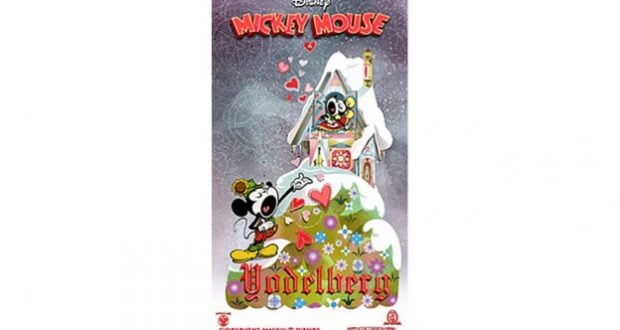 We are just a few short weeks away from the opening on Disney’s Hollywood Studios newest attraction, Mickey & Minnie’s Runaway Railway on March 4. To build the excitement, Disney has been releasing a poster countdown series. Check out the new “Yodelberg” poster and details below from DisneyParksBlog:

With Valentine’s Day upon us, Disney is releasing special poster art inspired by the Mickey short “Yodelberg” in our ongoing series celebrating the March 4 debut of Mickey & Minnie’s Runaway Railway at Disney’s Hollywood Studios!

As you can see, the new “Yodelberg” poster features Mickey longing to visit Minnie at her mountain chalet. In the video short, Mickey realizes that a potential avalanche and some unexpected surprises threaten to put an end to their yodeling duet.

You’ll soon be able to experience the surprises of Mickey’s cartoon universe like never before at Mickey & Minnie’s Runaway Railway.  During each adventure, you’ll enter the NEW Mickey Mouse cartoon short “Perfect Picnic” for an one-of-a-kind adventure where anything can happen. Why? Because here, mouse rules apply!

And before experiencing Mickey & Minnie’s Runaway Railway, you’ll see posters of these existing award-winning shorts that might have previously premiered at the Chinese Theatre – all created specifically for the attraction by Walt Disney Imagineering and Disney Television Animation.

Be sure to check out the “Yodelberg” short for a look inside an amazing cartoon universe you’ll be able to enjoy at Mickey & Minnie’s Runaway Railway beginning March 4, 2020, at Disney’s Hollywood Studios and later at Disneyland park in 2022.