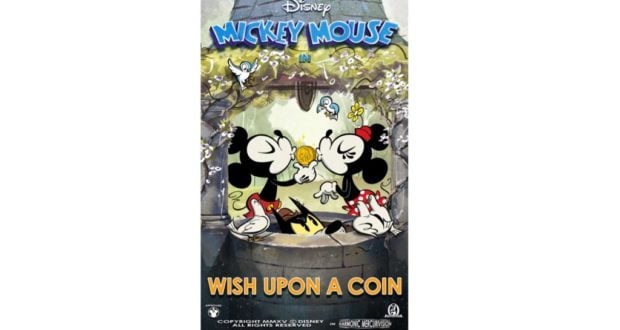 The New Year has begun and we are preparing for all the excitement that unfolds in 2020 at Walt Disney World! Disney has decided to kick off the year with the first in a collection of stunning new poster art celebrating the much-anticipated March 4 debut of Mickey & Minnie’s Runaway Railway at Disney’s Hollywood Studios. Check out the details below from DisneyParksBlog:

The new “Wish Upon a Coin” poster – inspired by Mickey’s popular cartoon short – was just unveiled during our DisneyParksBlog special New Year’s Eve LIVE stream.  As you can see, Mickey and Minnie are at the wishing well and we thought it was the perfect artwork to begin our countdown series and a new year of magical wishes!

At Mickey & Minnie’s Runaway Railway, the park’s Chinese Theater serves as the magic portal through which you can actually step into a colorful cartoon world where anything can happen. Why? Because here, mouse rules apply! On this zany, one-of-kind adventure, expect the unexpected as you ride through the NEW Mickey Mouse cartoon “Perfect Picnic”!

As you make your way to the “premiere” of “Perfect Picnic” in the attraction, you’ll move through the theater’s lobby and see whimsical posters of existing award-winning Mickey cartoon shorts created specifically for the attraction by Walt Disney Imagineering and Disney Television Animation.

Disney will be releasing more exclusive poster art in the coming weeks. In the meantime, be sure to check out the “Wish Upon a Coin” video short for a look inside an amazing cartoon universe you’ll be able to experience like never before at Mickey & Minnie’s Runaway Railway beginning March 4, 2020 at Disney’s Hollywood Studios and later at Disneyland park in 2022.