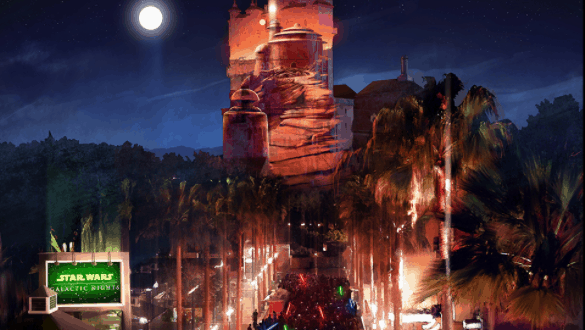 Star Wars Galactic Nights is rapidly approaching with almost a month to go until the big event.  The event is scheduled to take place on December 16th at Disney’s Hollywood Studios and is a special ticketed event taking place after park closing from 7 PM until midnight.  There were additional details for the event released today from Disney Parks Blog that guests will definitely want to know about. We are very excited about the celebrity guests and panelists that will be attending the event.  Warwick Davis will be at the event.  He has had roles in many of the Star Wars films and will also appear in Star Wars: The Last Jedi and Solo: A Star Wars Story.  David Collins will also be at the event hosting the “Inside Star Wars: Galaxy’s Edge” panel discussion along with various members of Walt Disney Imagineering and Lucasfilm.  The panel is set to include the following guests:  Scott Trowbridge (Portfolio Creative Executive in Walt Disney Imagineering), Robin Reardon (Executive Creative Producer in Walt Disney Imagineering), Chris Beatty (Executive Creative Director in Walt Disney Imagineering) and Doug Chiang (VP/Creative Director at Lucasfilm).  The panel is expected to give guests a look at Star Wars: Galaxy’s Edge, which is currently under construction within Disney’s Hollywood Studios (as well as Disneyland in California).

Plus, guests will still be able to enjoy various attractions around the park, meet and greets with characters, special merchandise offerings and specialty food and beverage options.  Guests will also be able to wear costumes as long as they adhere to Disney’s costume guidelines.

Tickets to the event are available for purchase.  The cost is $129 for adults and $124 for children aged 3 to 9.  There are special discounts on the ticket prices available for Annual Passholders and DVC Members.  The tickets can be purchases online or by calling 407-W-DISNEY.

What are you most excited about at Star Wars Galactic Nights?