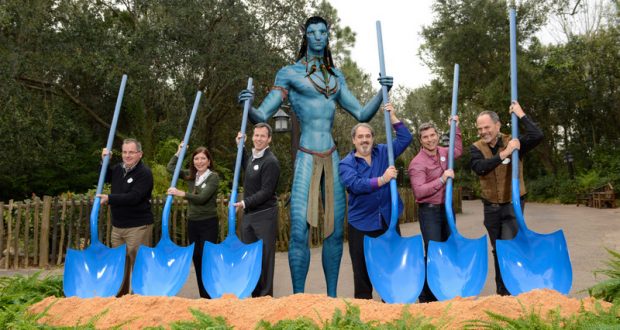 As part of Chapek’s conversation with D23 host Jeffrey Epstein, he revealed the new entry bridge to Pandora – The World of Avatar. According to the storyline developed by Walt Disney Imagineering and Lightstorm Entertainment, this bridge was built during a time when a destructive company called the RDA – Resources Development Administration came to Pandora. Now that they are long gone, nature is breaking down evidence of their presence. This bridge will soon serve as an entry into the base camp of Alpha Centauri Expeditions, the eco-tour group that will host explorers on their Pandora adventure.

“I think the thing I’m most excited about right now to experience would be everything in Pandora.” Chapek said. “From the place-making to the two extraordinary attractions that will be in the land – both the Na’vi River Journey as well as Avatar Flight of Passage, these promise to set new high-watermarks for our experiential magic we give our guests.”

Chapek shared details of the two, new signature attractions of Avatar Flight of Passage, where guests will fly over the jungles of Pandora on a Mountain Banshee and Na’vi River Journey, a family-friendly boat ride through the bioluminescent forests. He also gave a first look at the new Satu’li Canteen, which is the main dining establishment for Pandora, featuring Na’vi art and cultural items; Windtraders, where travelers can purchase Na’vi cultural items, toys, science kits, and more; and the Pongu Pongu, a drink location with a design that is as eclectic as its Expat owner.

Coming in summer of 2017, Pandora – The World of Avatar will complete the transformation of Disney’s Animal Kingdom. Disney in collaboration with filmmaker James Cameron and Lightstorm Entertainment is bringing to life the mythical world of Pandora, inspired by Cameron’s AVATAR, at Disney’s Animal Kingdom theme park. The awe-inspiring land of floating mountains, bioluminescent rainforests and soaring Banshees will give guests a transformational experience they will never forget.

Chapek gave the sneak peek at the updates to an enthusiastic crowd of Disney fans at the “Destination D: Amazing Adventures” conference for D23, the official fan club for The Walt Disney Company. The “Destination D” Convention, held this year at Disney’s Contemporary Resort, also features a panel by the creative team behind Pandora – The World of Avatar including filmmaker James Cameron, producer Jon Landau and Joe Rohde, Creative Director for Disney’s Animal Kingdom from Walt Disney Imagineering. 2016-11-19
Rick Killingsworth
Previous: “Starlight Holidays” Drone Show Begins November 20 at Walt Disney World
Next: 8 Things You Should Definitely Do When You Arrive at Disney’s Animal Kingdom