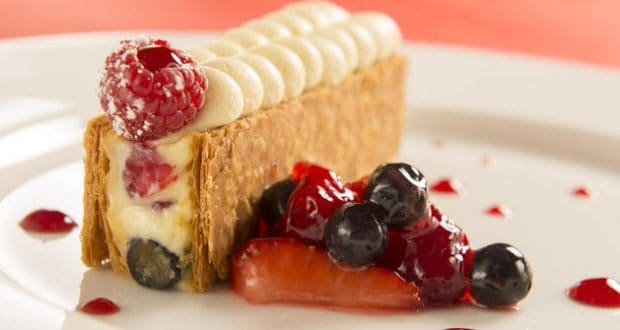 New Additions to the 2016 Epcot International Food and Wine Festival

This year’s Epcot International Food and Wine Festival promises to be as exciting (and delicious!) as ever. The 2016 festival will stretch a total of two full months, from Sept. 14 through Nov. 14—and best of all, 47 percent of food tasting plates will be brand new at the festival’s more than 30 global marketplaces.

Here are just 10 of the new foods, cocktails, and experiences that Walt Disney World park-goers can savor at this year’s festival.

Dessert and champagne is already a winning combination, but this year, park-goers will be treated to a grown-up twist on a childhood favorite: hard soda and vanilla ice cream floats. You can choose from the Best Damn Hard Root Beer Float, Sprecher Hard Cherry Cola Float, or Sprecher Hard Orange Cream Soda Float. And, of course, there are non-alcoholic varieties for the under-21 set, made with a choice of Coca-Cola or flavored Fanta.

Another popular Food and Wine Festival kiosk, this year Greece will serve a brand new vegetarian option alongside fan favorites like spanakopita and chicken gyros: the Vegan Loaded Greek Nachos, which are piled high with pita chips, meatless sausage crumbles, and vegan tzatziki. The booth will also offer a new dessert option; the Oikos Greek Yogurt Vanilla Cake is soaked in Ouzo and served with yogurt whipped cream and pistachios.

At this year’s Wine and Dine Studio Marketplace, guests can devour a new seared scallop dish, which is served with truffled celery root puree, Brussels sprouts, and wild mushrooms.

In France, a savory new onion soup will make its debut at the 2016 festival. The Soupe à l’oignon au Gruyère et Cogna is an onion soup made with Gruyère cheese and Cognac. You can wash it down with the new Frozen Daiquiri Ice Pop; the refreshing spiked ice pop will be a strawberry puree with French Caribbean Rhum Clément.

In addition to being a record 62 days long, the 2016 International Epcot Food and Wine Festival will also expand into locations throughout the Walt Disney World resort for the first time, with all-new experiences and meals offered at various resorts and restaurants. The events include: “Brunch with a Twist” at Disney’s Grand Floridian Resort and Spa, a five-star, five-course meal prepared by award-winning chefs; “The Secrets of Flavor at Disney’s Yacht Club Resort,” a three-course lunch highlighting a sensory-food connection at Yachtsman Steakhouse; Culinary Adventures with a Master Chef” at Disney’s Contemporary Resort, a hands-on chef’s table experience held in a professional working kitchen; and the “Behind the Scenes at Trader Sam’s Grog Grotto” at Disney’s Polynesian Village Resort, a tour that includes lunch and a mixology session.

For the second year in a row, the Food and Wine Festival Booths will infiltrate Epcot’s Future World with the Next Eats Festival Area. This year, the booth will spotlight popular ABC cooking show, The Chew, as a follow-up to last year’s Sustainable Chew booth. Don’t miss the delectable Peanut Butter and White Chocolate Mousse dessert from this year’s The Chew Collective booth.

4. Islands of the Caribbean

Though there have been Caribbean offerings at the Epcot Food and Wine Festival in the past, this year the festival welcomes the Islands of the Caribbean Booth, which will feature island-infused combinations like Mojo Pork with Black Beans and Rice.

This year, hands-on workshops like the Mix it, Make it, Celebrate it (appropriately named after the Magic Kingdom street party) will give guests the opportunity to learn culinary skills from professional chefs, bakers, and mixologists. Be sure to stop by the Festival Center to try your hand at skills like cake decorating and cocktail mixing, or to learn how to use herbs to enhance flavor in your cooking at home.

It may technically be a wine festival, but there are always plenty of options for beer lovers. A mouthwatering new addition to the Hops & Barley booth will be the Smoked Brisket with Pimento Cheese, served on griddled garlic toast.

2016-07-21
Jennifer Nelson
Previous: 8 Tips for a Successful Weekend Trip to Walt Disney World
Next: 10 Disney Quotes to Start Your Day Off Right