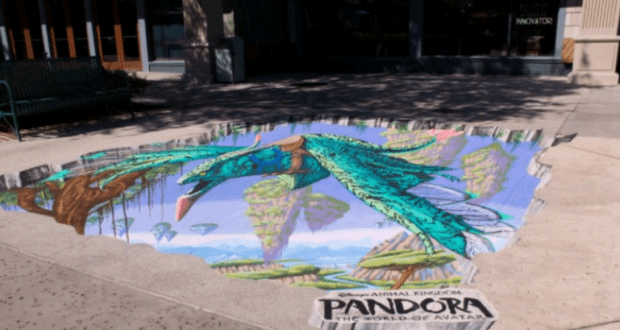 There has been a new 3D photo opportunity added to Disney Springs to celebrate the opening of Pandora – The World of Avatar at Disney’s Animal Kingdom in Walt Disney World.  The new photo opportunity (featured in the article photo) included the floating mountains from Pandora and a banshee that you can pose with for a fun and unique photo that makes it almost look like you really are in in Pandora right from Disney Springs.  This new photo op is located near Ghirardelli and World of Disney.  The lime garage would be the closest garage to park to get to the location.

Disney has been adding more 3D photo ops around Walt Disney World lately.  These are photo ops that have been painted on the sidewalk and the guests can stand in them for a really neat photo.  Epcot has been featuring these photo opportunities recently and we hope we start to see these more at the other parks.  they are are a lot fun and make for great photo keepsakes to commemorate the vacation.  It is so much more unique than just taking photos in front of backdrops.

Pandora – The World of Avatar officially opened today, so we expect Walt Disney World to be extremely crowded and see a large influx of guests.  This will especially be true for Disney’s Animal Kingdom with all of the action happening over there with the new immersive land.

Has anyone seen this new photo op yet?  We’d love to see your photos.