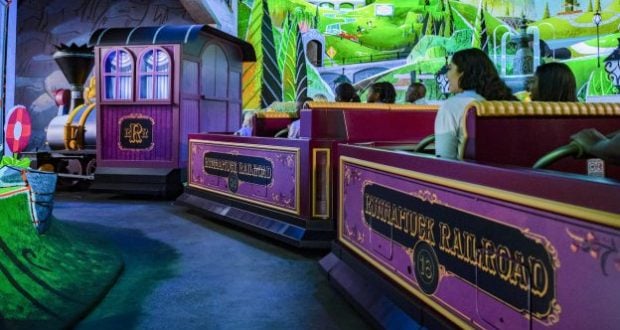 Mickey & Minnie’s Runaway Railway: Everything You Should Know About the New Attraction at Disney’s Hollywood Studios

Roll out the red carpet! March 4th has finally arrived and Mickey & Minnie’s Runaway Railway is NOW open! Here’s everything you’ll want to know about this new attraction from DisneyParksBlog:

At Mickey & Minnie’s Runaway Railway,  you’ll enter the NEW Mickey Mouse cartoon short “Perfect Picnic” for a one-of-a-kind adventure where anything can happen. Why?  Because here, mouse rules apply! And from “first looks” and fun trivia experiences to special art inspired by the attraction and more, we’ve shared many great reasons to be excited about the debut of this one-of-a-kind attraction!

It seems like just yesterday when we first saw the attraction’s new marquee!  In the story, someone we all know and love happened to stumble across it in the wee hours of the morning and made some magic happen.

During the Disney Channel holiday special, “Disney Channel Holiday Party @Walt Disney World,” viewers got a special look at Mickey & Minnie’s Runaway Railway rolling into Disney’s Hollywood Studios in Florida on March 4, 2020, and coming to Disneyland park in California in 2022.

At Mickey & Minnie’s Runaway Railway, guests have the opportunity to embark on a whirlwind adventure using either FastPass+ (as available) or a standby line. FastPass+ for this new attraction was made available in My Disney Experience app for guests planning visits on or after March 4.

For Mickey Mouse and Minnie Mouse birthdays, we shared the first of a 2020 series of poster art to celebrate this attraction.   Before experiencing Mickey & Minnie’s Runaway Railway, you’ll see posters of these existing award-winning shorts that might have previously premiered at the Chinese Theatre – all created specifically for the attraction by Walt Disney Imagineering and Disney Television Animation. Here are some favorites:

Let us know what you think of this new, fantastic attraction!