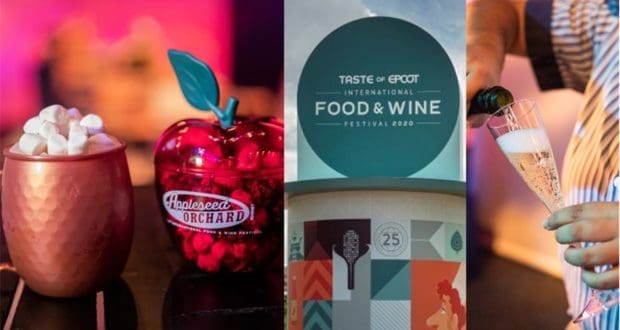 The main change for the next part of the festival is the merchandise, so I’ll start with that. The items are in four different collections this year. The first features Chef Figment. There are rainbow colors to spark your imagination and creativity. There are a couple of different shirts (make sure you look on the back of the hoodie), a mug, a tumbler, and more. Some of the items include measurement conversions, so they’re practical as well as collectible.

The second collection is Taste Your Way Around the World. There are t-shirts, pins, a hat, and even a cutting board. The wine glass that is part of this collection is the only item that is a reminder that this is the 25th Food & Wine Festival.

Chef Minnie is the star of the third collection. She is the “Queen of Cuisine”, and you can wear an apron that states so! You will also find a water bottle, a tumbler, pins, dishes, towels, and a spatula that celebrates the world’s second most famous mouse.

The final collection is the Passholder collection. There are a lot of options for Passholders, many of which state “olive to cook”. Some of the items are pins that are exclusive to Passholders, t-shirts, and a set of glasses. The glasses will all be released at once this year, since many people will not be able to visit multiple times.

We also saw three of the Dooney and Bourke bags that are going to be part of this year’s Food & Wine Festival. A fourth bag will later be released, and that will be a Passholder exclusive. The date for the final bag was not yet known.

Most of the new merchandise is going to be sold in Epcot starting on September 1. Not all items will be available on that date, but the majority will. A large portion of the items will also be sold on ShopDisney.com or through the link on the My Disney Experience App. Although they did not have the list of which things will be sold online, I was told that more will be available than in the past. Disney realizes that not everyone will be able to travel right now, so they want for as many people as possible to be able to purchase their favorites. For more photos of merchandise, click here!

We also saw the new prizes for Remy’s Ratatouille Hide & Squeak. The scavenger hunt has been running since the park reopened, but the prizes are from the Flower & Garden Festival. The new prize will be one of four water bottles; they feature Mickey, Minnie, Remy, and Figment. You don’t have to actually find all of the Remy figures in order to receive your prize, but it’s a lot of fun to look for him.

There are currently over 20 Festival Marketplaces throughout Epcot. They feature extra foods from around the world that are not usually found in the parks. If you’ve been to Epcot, you might have noticed that there are other booths that are marked “coming this fall”. The date for those to open still has not been given, but I was told that it will not be too much longer. Check out delicious food photos below!

The Eat to the Beat Concert Series is not taking place this year, but there is still live entertainment. Mariachi Cobre and the JAMMitors both perform in the America Gardens Theater. The Piano Lady also performs, she can be found inside the World Showplace Pavilion. That’s the building in the back between Canada and the United Kingdom. She brings a lot of joy to her performances. That area is wonderful, you can enjoy great music, food from several marketplaces, and the AC, all at the same time.

There are no paper passports this year. That does not mean that you won’t have a guide. Download the My Disney Experience App, then look for Taste of Epcot International Food & Wine Festival 2020 on the homepage. All the information that you need will be at your fingertips, including the menus and where to find merchandise.

Remember, this is not the full Epcot International Food & Wine Festival. If you head into the park expecting what you have experienced in the past, you will be disappointed. The emphasis this year is on “taste”. With the lower crowd levels, eating around the world is easier than ever. This is the longest festival in Epcot’s history, and an end date has not yet been announced. We can expect it to run into at least part of November. I, for one, would like to thank Disney for giving us this mini-festival. They could have just called it off this year, but decided instead to let us have at least part of the experience. It’s scaled back, but there is plenty of magic to be found.