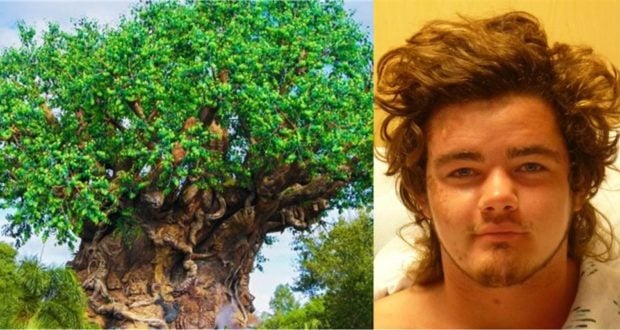 In an apparent drug-induced rage, a South Florida man attacked a Disney security guard at Animal Kingdom’s DinoLand U.S.A. on October 25, according to an Orange County Sheriff’s Office report.

As reported by the OrlandoSentinel: James Arvid, 19, of Pompano Beach, was arrested and charged with battery on a security guard, a third-degree felony, according to Orange Circuit Court records. He has pleaded not guilty.

The uniformed 41-year-old Disney security guard was on patrol in the DinoLand U.S.A. area when Arvid tackled him from behind. Arvid put the guard in a headlock and held him down, but the guard still managed to radio for help. Eventually, theme-park guests noticed what was happening and pulled Arvid off the guard and “subdued him” until law enforcement arrived.

The ordeal left the guard with two bloody cuts on his elbow, but he was not seriously hurt, the report said. No guests were hurt, according to Disney. A deputy sheriff described Arvid as “bloody, sweating profusely, non-responsive to commands, and compulsively kicking his legs.”

“I took LSD and tried to kill someone,” Arvid later told a nurse but he could not remember anything else that had happened at the park, according to the report. An emergency room doctor told authorities Arvid showed signs of heatstroke, alcohol use, and drug use which could lead to aggression and a heightened mental state, the report said.