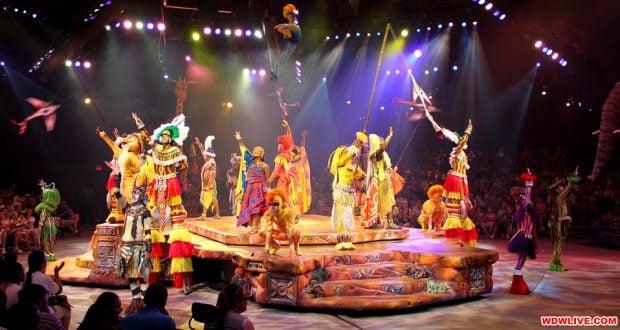 The creators of the classic Disney movie, The Lion King, made a special appearance at a recent performance of Festival of The Lion King at Disney’s Animal Kingdom in Walt Disney World.  The surprise appearance was to commemorate the re-release of the the film coming to Blu-Ray and DVD.  Voice Actor Ernie Sabella (Pumbaa), Producer Don Hahn and Co-Director Rob Minkoff were the ones in attendance for the lucky guests at the show.  Sabella was introduced prior to the show officially starting and wished all in attendance a “Hakuna Matata” to kick off the show.

Here is a video of their commentary and clips from the performance:

The trio loved the show and talked about the the African culture that is represented during the show.  “Borrowing from so much great culture that exists in Africa, not only musically but visually, was something we certainly did for the film and to see it translated into a live show is terrific.” Rob said.

Who will be buying a copy?  Who else would have loved to have been in the audience during this special performance?