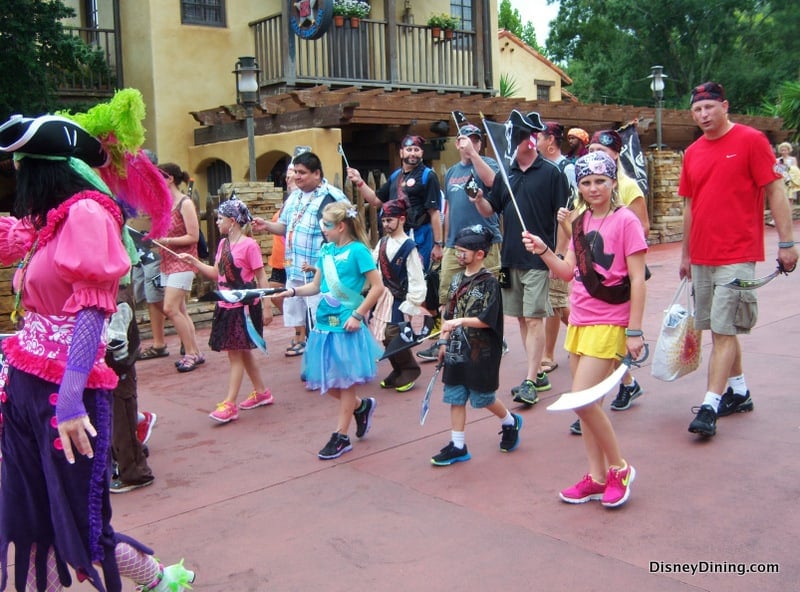 Ahoy, Mateys! National “Talk Like a Pirate Day” inspired this latest entry into Limited Time Magic at the Magic Kingdom.   During Pirate’s Week you can enjoy The Rusty Cutlass band in the Royal Caribbean Plaza.  Meet Captain Hook, Pirate Goofy and Jake from “Jake and the Never Land Pirates”.   Join in a special pirate parade ahead of the “Celebrate a Dream Come True” Parade that takes place at 3PM Daily.

If you are a Pirate, or just a fan of pirates, you may want to enlist early at the Pirate’s League, which is found adjacent to Pirates of the Caribbean, for a pirate makeover, or just some adjustments to your already scurvy looks.  Get the full treatment and you will also receive a set of fake teeth to complete your look.  If you are one of the lucky ones to score an early appointment, you may also be selected to be a part of the pirate parade in the afternoon.  Children and adults are all invited to participate.  This is especially fun if you are also attending the Mickey’s Not So Scary Halloween Party the same evening.  Arrgghhh!

Shortly before the 3PM parade time the enlisted pirates meet up in Frontierland with their pirate guides who supply them with small pirate flags to wave and are taken “back stage” to learn the pirate way of parade processions.  As others are lining up at the parade ropes for a good viewing point, you could be back stage with Disney pirates getting ready to march through the Magic Kingdom.  It looked like the participants had a great time.  This will take place each day of Pirate Week.

The parade emerges with the pirate crew leading the way.  Also in the parade are several dancing pirates, Jake from “Jake and the Never Land Pirates” atop a huge pirates treasure chest surrounded by thousands of doubloons and gems,  a real pirate ship with Captain Hook at the helm and even his sidekick Smee is on board.  There is singing amongst the crowd to the music that accompanies the parade.  Even this cloudy day does not dampen the enthusiasm for Pirate’s week.

The Rusty Cutlass Band was not out due to weather, but you could still snag a great photo with Jake from “Jake and the Never Land Pirates” on the Adventureland veranda.  Keep your eyes peeled for Goofy Pirate and that pesky Captain Hook.  You won’t want to miss the regularly occurring Captain Jack Sparrow’s Pirate Tutorial in Adventureland across from The Pirates of the Caribbean attraction.  The whole family can enjoy hopping aboard The Pirates of the Caribbean ride, arguably one of the best rides at Walt Disney World and certainly a must to do during Pirate Week.  You won’t find a shop with more pirate gear for the whole crew than the one at the exit of The Pirates of the Caribbean ride.  Continue the theme by riding the extremely popular Peter Pan, in Fantasyland.  You will see Captain Hook, Smee and the ticking crocodile, along with the other beloved characters of the Peter Pan story. 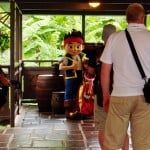 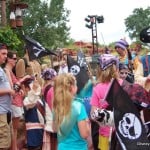 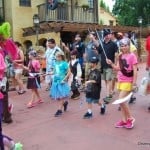 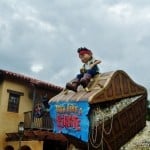 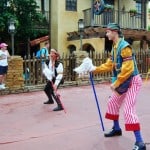 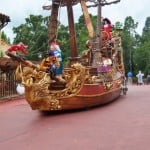 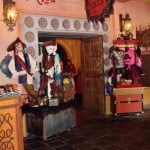 2013-09-25
Cassie
Previous: Epcot Food and Wine Guide Released.
Next: News and Views around the Magic Kingdom this week