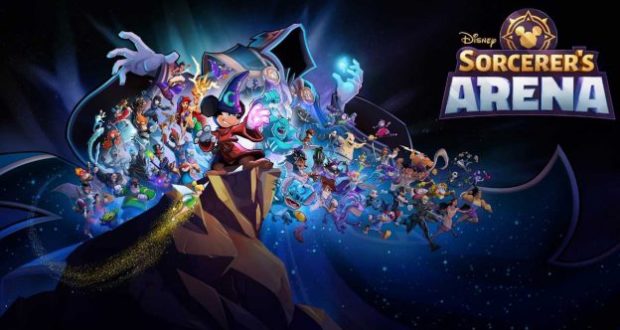 The new Disney and Pixar mobile game Disney Sorcerer’s Arena conjures up hundreds of Disney and Pixar characters at their gutsiest and fiercest, ready to go head-to-head in a quest to be legendary! Check out the details from DisneyParksBlog below of this recently launched mobile game:

Recently launched, the game offers a fun way for fans and players to take the characters they love on the go anywhere, and invoke some Disney Parks magic along the way.

Make your team even mightier by collecting new characters Ian, Barley, and The Manticore from Disney and Pixar’s Onward during the “Path of Peril” in-game event, on now through April 5.  Also available now in-game for a limited-time is the exclusive Sorcerer’s Arena Mickey outfit.

Disney Sorcerer’s Arena also offers players special magic with Disney Parks attractions in the form of powerful spells to take your gameplay to the next level. Rock your opponents with spells like Splash Mountain Soak and Thunder Mountain Boom and impress your fellow players at the same time.

Disney Sorcerer’s Arena is available worldwide and can be downloaded for free on the App Store or Google Play and contains in-app purchases. New characters, spells, and events are added all the time, so enter the Arena and unleash your ultimate team today!