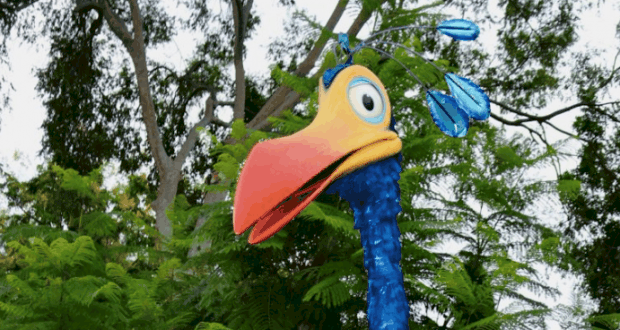 All of you Wilderness Explorers out there are going to be excited to hear some of this latest news from Disney Parks Blog!  Kevin from the Disney-Pixar film, UP, will be coming to Animal Kingdom at Walt Disney World.  She is expected to arrive sometime in February!  Here is the fun way that Disney Parks Blogs made the announcement:

Greetings, fellow Wilderness Explorers. I’m writing with news from a recent expedition to South America. We’ve been tracking the large and exotic bird known as “Kevin” – you might remember her from the Disney•Pixar film “Up!” – and she appears to be migrating north from Paradise Falls, headed in the direction of Disney’s Animal Kingdom.

Experts anticipate Kevin will arrive at the park sometime next month. Senior Wilderness Explorer Russell and his furry friend Dug are also at Disney’s Animal Kingdom, greeting guests and discovering various species of birds from around the world in the show “UP! A Great Bird Adventure.” You can visit them daily on Discovery Island and catch their show at the Anandapur Theatre.

We will keep you posted as we learn more about Kevin’s migration to the park!