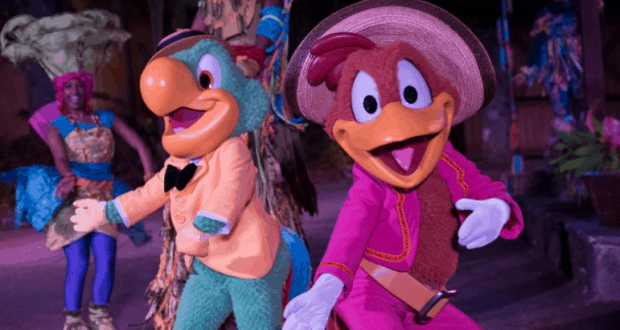 We are always excited when we have the opportunity to see more characters make their way out and about in Walt Disney World.  We have now learned from Disney Parks Blog that José and Panchito, the lovable feathered friends of Donald Duck, will being to make an appearance at Disney’s Animal Kingdom.  You might recognize them from their appearance in the movie, The Three Caballeros, with Donald Duck.  They are also in the attraction at the Mexico Pavilion in Epcot’s World Showcase, Gran Fiesta Tour Starring the Three Caballeros.  They will now be a part of the Discovery Island Carnivale at Disney’s Animal Kingdom starting on February 4th.  Their special appearance will run each night through May 5th, 2018.

The Discovery Island Carnivale is an event that takes place each night in the Discovery Island area of the park.  It is a dance party with music performed by the Viva Gaia Street Band!  The costumes that the characters and cast members wear are inspired by all of the amazing creatures that live all around the world in the air, land, sea, etc.

If you like to meet and greet with characters, then you definitely want to go and enjoy the dance party with José and Panchito while you still can!

Who else is as excited as we are about their introduction to Disney’s Animal Kingdom?