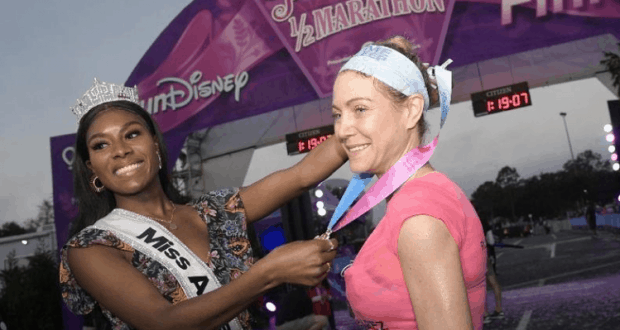 This weekend was the Disney Princess Half Marathon Weekend at Walt Disney World.  The events included kid races, 5K, 10K and the main event, the half marathon.  Per updates from Orlando Sentinel, Jackie Pirtle-Hall was the overall winner for the half marathon with a time of 1 hour, 18 minutes and 30 seconds.  The next best time was from Bianca Toldeo, who had a time of 1 hour, 22 minutes and 52 seconds.  Jackie is from Missouri and has been running since the 5th grade.   She participated in the 2012 Olympic Marathon Trials and ended up placing 70th.  She will be participating in the Olympic Marathon Trials again in 2020.

Jackie, who wasn’t as used to the heat of Florida, told the Orlando Sentinel, “It was weird for me that I was sweating. I was like, ‘Why am I sweating?’ I haven’t done that in about five months, because it has been a really harsh, cold winter.”  I am sure that it would be a little difficult for a runner to adjust to warmer temperatures when they had to train in the cold.  It didn’t seem to negatively affect her since she still finished with an amazing time and took the overall win.

Who out there participated or had a loved one participating in the race events this year?  We’d love to hear how they finished!