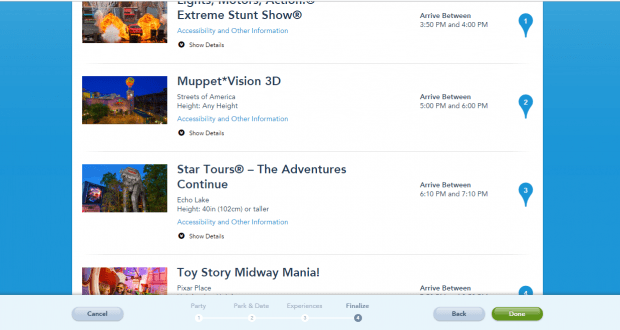 Is Disney Adding a Fourth FastPass+?

Today I went onto the Walt Disney World website to make FastPass+ reservations for tomorrow because my daughter and I plan to go to Disney’s Hollywood Studios. After I put in my three choices, I was surprised to see that we had been given four FastPass+ options. The three that I had chosen were all there, and there was also a suggested time for Lights, Motors, Action! Extreme Stunt Show. If I didn’t want that, one of the other options included Indiana Jones Epic Stunt Spectacular.

I was curious, so I made my reservations. I then decided to see if I could modify the extra FP+. There was no problem, the other Tier Two attractions that weren’t full were available. I then tried Epcot, but it would only allow me three selections. I picked a random date in April and tried with DHS once again, and could only reserve three. I kept fooling around with the system. I was able to get four reservations for both Tuesday, March 31, and Wednesday, April 1, at Magic Kingdom, at Disney’s Hollywood Studios, and at Disney’s Animal Kingdom, but not at Epcot. I canceled the reservations for 3/31 and 4/1 so that someone else could have them.

Does this mean that Disney plans to add a fourth FastPass+? Nothing official has been said, but I know that I’m not the only one who hopes that a revamp of the system is coming. I have heard through the grapevine that Disney is disappointed that guests don’t usually try for the fourth FastPass+ while in the parks. Maybe this is a step in the right direction. (See the screenshot below)