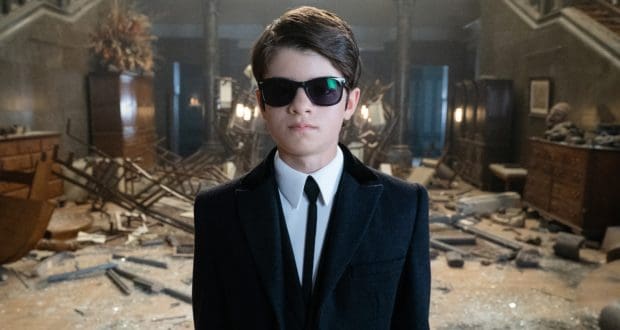 Inside Look at the World of “Artemis Fowl” Coming to Disney+

Disney+ is releasing Disney’s Artemis Fowl on June 12 and we couldn’t be more excited! The movie features a 12-year-old (Artemis Fowl) in a battle of strength and cunning against a powerful hidden world of fairies who may be behind his father’s disappearance. Check out all the details, official trailer, and an inside look as shared below by Disney+ News.

We visited the set of Artemis Fowl in London in 2018 to learn more about this wondrous tale, and got a unique opportunity to meet the incredible people who brought the magical mystery to life. Here are three fun facts we learned during our visit:

1.  The set is a real, functioning house!

In the movie, Artemis Fowl’s home, Fowl Manor, is a huge brick mansion, with a giant planetarium dome on the roof and a lighthouse on one end. All the impressive additions are said to be added to the Fowl Manor by different ancestors over centuries. The set of Fowl Manor had to be designed in a particular way in order to accommodate the movie’s continuous shots, moving from exterior to interior. According to production designer Jim Clay, creating the Fowl Manor was no easy feat:

“We scoured around parts of Europe, and obviously the U.K. It was apparent very quickly that the action we had to carry out, and the damage we had to do to the house with the troll (once a 15-foot troll enters your house, there’s going to be a bit of collateral damage) we were going to build it, fairly obviously.”

So the crew built the actual Fowl Manor! The set is a real, functioning house. It has electricity, heat, and a roof. It could almost be lived in, except there is no running water.

It’s the largest fairy city in the Lower Elements and in the extraordinary world of Artemis Fowl, and Haven City is equipped with impressive technologies. Gnomish keyboards are multi-tiered, like a futuristic, layered typewriter, and fairies have mind-wiping devices.

“We tried to create a paperless society in Haven City,” explained prop master Barry Gibbs about how they brought the technology of the fairies to the forefront.

3.  Elements from the natural world were incorporated into the magical costumes.

From fairies to dwarves and goblins, Artemis Fowl has a lot of magical creatures and species. Bringing those species to life was no easy feat, and both the set design and the costumes looked to nature for inspiration in creating a unique and mystical world. Organic shapes make up Haven City, which is peppered with rock formations that are engraved with different languages. Even the iridescent green uniforms for the LEP (Lower Elements Police) are a nod to nature, and are made to look like bugs and beetles.

“For the LEP uniforms, we didn’t want them to look like they had superhero uniforms. So we didn’t want to get into spandex or too military,” explained costume designer Sammy Sheldon Differ. “One of the things across all the departments that we researched was using this kind of juxtaposition of nature and geometry. So this sacred geometry that came from the fairy world, and the natural geometries that we had been researching in nature, we tried to pull it all together.”