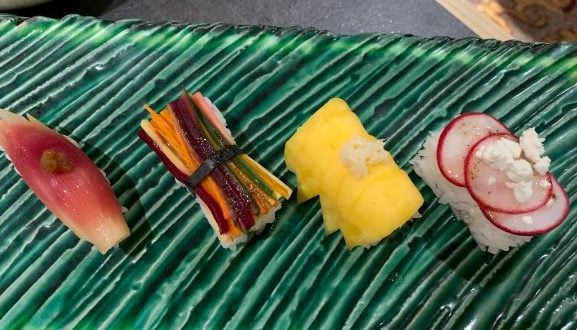 When my daughter and I were in Anaheim for the D23 Expo in August, we were hosted by the incredible Anaheim Majestic Garden Hotel. The hotel is close to opening a brand new full service place to eat; Hanagi Japanese Restaurant. Although it was not yet open when we were there, we were invited to attend a special meal that is similar to what Hanagi will offer. I already plan to return the next time I’m in Anaheim, the food was that good.

The new restaurant will be headed by Chef Hiro. He is from the southern part of Japan. He worked in Tokyo for ten years, where he learned and perfected his craft. He has also worked in Viet Nam, Guam, and eventually ended up in California. Not only is he an expert at creating Japanese cuisine, he has mastered other types, including Mexican, Italian, and American.

We started off with sushi. I am not really a fan of raw fish, so Chef Hiro prepared vegetable sushi for us. I loved the range of flavors, and the textures were incredible. I could tell that each piece was prepared with love. The dish was truly a work of art, and it was all so good that I could not pick a favorite.

Next we moved on to a traditional shabu shabu meal. This will be one of the main choices at Hanagi. I had never tried shabu shabu before, and did not really know all that much about it. It’s a meal that is cooked at your table. For us there were two different types of broth, one was clear and the other was a light tomato broth. These were heated, and then the food was cooked in the broths. We were given the option of adding things such as chili pepper sauce if we wanted extra heat. I am not big on spicy food, so we decided to just keep the broths the way that they were.

The items for our shabu shabu meal were added to the broths based on how long they take to cook. After something was ready, we would enjoy that while the next item cooked. Each time something was added, it would add more flavor to the broths. We were asked how we liked our vegetables cooked. We didn’t want them cooked too much, but if we wanted them more on the mushy side that would have been possible. The meal really was based on our tastes.

After we had finished with our proteins and our vegetables, Udon noodles were added to the broths. There were still some vegetables in the broths, and once the noodles were cooked we had the broths as soup. We were already full, but the flavors were so magnificent that we ate it anyway.

Chef Hiro then sent out a special dessert that he had prepared. I do not know the name of it, but it was just as delicious as the rest of the meal.

If you follow a special diet or have food allergies, you will not have a problem at Hanagi Japanese Restaurant. Just let them know when you arrive, and the staff will take good care of you. I might not have met everyone who will be involved with the new restaurant, but each person who we met at the hotel was friendly and did their jobs with a smile. I expect no less from the new restaurant’s staff.

Hanagi Japanese Restaurant will hold soft openings later this month, and is expected to open in October. You do not need to be staying at Anaheim Majestic Garden Hotel in order to dine there. The hotel and the restaurant are not far from Disneyland, in fact we walked to Disneyland once during our stay, it’s that close. Hanagi Japanese Restaurant is not a meal that you should book if you’re in a hurry. Instead, it’s the type of place where you can relax and really enjoy each bite. It is perfect for a romantic meal, but it is also something that the kids will enjoy. Disneyland doesn’t have as many international choices as Walt Disney World does. If you are looking for an authentic Japanese meal on your Disneyland vacation, the perfect place to have it will be open soon. I can’t wait to go back, although I have no idea when I’ll be in California again.