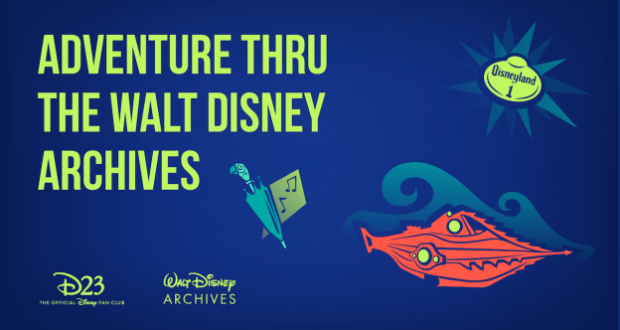 This week, Disney announced that D23 will be celebrating the Walt Disney Archives and its Golden Anniversary throughout the month of June. With this celebration, Disney fans will have a change to take an inside look at the wonders of this amazing collection of “everything Disney.” Check out the details below as shared by DisneyParksBlog.

The Archives is the company’s repository for all of its treasures – from film to television to parks around the world.  And its vaults hold incredible riches like Walt Disney’s correspondence files, the contract that started the Walt Disney Company, Mary Poppins carpet bag, the Nautilus, Mousketeer Annette’s famous sweater and even amazing treasures like the first ticket to Disneyland and Walt Disney’s own (#1) park nametag. So, we hope you’ll join us for special peek into the Archives this month, and if you want to see even more, we’ll be premiering a brand new film called “Adventure Thru the Walt Disney Archives.”

This new short-form documentary celebrates all 50 years of collecting and preserving the history of the Walt Disney Company.  Hosted by renowned producer Don Hahn, the film gives viewers a look inside rarely-seen Archives locations, including those at Disneyland park, Disney California Adventure park, and the Studio Lot through a historical lens. Each stop on our adventure features treasured artifacts–some are obscure, others are iconic–but all have played a pivotal role in Disney history. The culmination of the film brings us to one of the Archives’ most amazing achievements—the restored Offices of Walt Disney.

So here’s to another 50 years and beyond Preserving the Magic of The Walt Disney Company! For more details on the Archive’s anniversary, visit D23.com.

2020-06-12
Jamie Sylvester
Previous: SeaWorld Orlando Is Open! Details & Photos from Our Visit
Next: NEWS: Walt Disney World is Suing Over Its Property Taxes