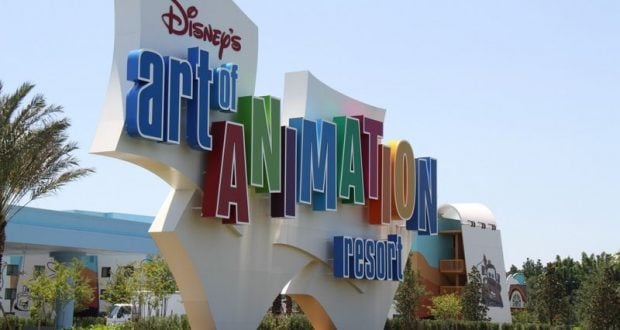 We have received confirmation from various news sources that Brian Keith Olmstead, a 35-year-old father from Brunswick, Ohio was arrested on Monday, May 15th.  He was arrested at the resort he was staying at with his family, Disney’s Art of Animation Resort, after there were multiple complaints from other guests.  Disney attempted to first escort him back to his room, but he returned to the food court to continue being belligerent and disrupting other guests.  This is included spouting racial slurs and pushing a stroller with his child in it into crowds and other guests.  Upon further investigation from paramedics at the scene, they found that his small son had been sitting in a dirty diaper for hours and had first degree burns on his legs and feet, expected to turn to second degree burns, from being extremely sunburned.

The Olmstead family was visiting for a cheerleading competition at ESPN’s Wide World of Sports.  Olmstead’s wife stayed at Wide World of Sports when Olmstead left around 3:30PM to head back to the resort with their young son in order to let the boy take a nap and rest.  He ended up hanging out at the pool bar and drinking while his child sat in the stroller.  The resort received numerous complaints about him over the next few hours until he was arrested.  He had apparently spouted numerous racial slurs and awful statements, including telling calling officers names and telling one office that , “Donald Trump was going to kill him.” He has been arrested for a few offenses, including Child Neglect.

It was also confirmed, according to various news sources that this isn’t Olmstead’s first run-in with the law. He has prior arrests for a DUI, resisting arrest and disorderly conduct.  He was being held on a $2,200 bond at an Orlando jail for this most recent arrest.  We all hope the little boy is OK and heals from the burns after this awful situation.