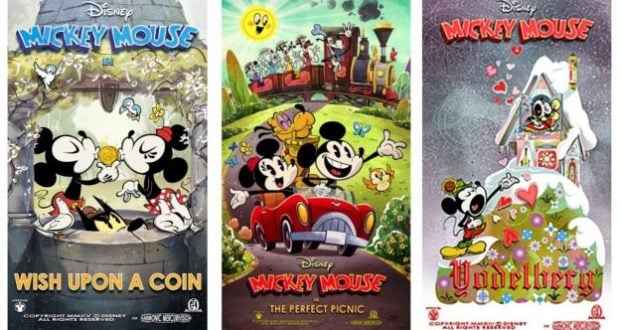 Mickey & Minnie’s Runaway Railway is open!  You can now experience Mickey’s cartoon universe like never before with the new Mickey Mouse cartoon short “Perfect Picnic” for a one-of-a-kind adventure. To celebrate the grand opening of this attraction, Disney launched an exclusive poster series which began a few months ago. Check out this recap of the Mickey shorts and poster series below from DisneyParksBlog:

During the last few months, we’ve partnered with Walt Disney Imagineering to share a special peek at some fun posters of some existing award-winning Mickey Mouse shorts that might have previously premiered at the Chinese Theatre. We wrapped the series before last night’s LIVE dedication ceremony but have rounded up all of the great art for you to enjoy!

For those of you who’ve been following along on our series, we’ve partnered with Walt Disney Imagineering to bring you a downloadable attraction poster! Click on the image above for the official attraction poster inspired by the lobby poster celebrating the premier of Mickey and Minnie’s latest cartoon short “Perfect Picnic.”

We’re continuing our ongoing countdown series with special art inspired by the “Wonders of the Deep” short.

Our “Potatoland” poster features Mickey Mouse, Goofy and Donald Duck at the entrance of a one-of-a-kind theme park! In the video short, Mickey and Donald try to make Goofy’s dream come true by building a surprise theme park of potatoes!

Our “Yodelberg” poster features Mickey longing to visit Minnie at her mountain chalet. In the video short, Mickey realizes that a potential avalanche and some unexpected surprises threaten to put an end to their yodeling duet.

This poster features a whimsical look at Mickey speeding through Paris! In the video short, Minnie’s cafe runs out of croissants and Mickey must go on a wild ride battling traffic and a few surprises to deliver the treats.

Our next poster features Mickey driving a jolly elephant on what appears to be a routine trip.  However, in the video short, the rickshaw ride is anything but ordinary as Mickey embarks on an epic journey of a lifetime with a special guest!

Our “Tokyo Go” poster features a look at Mickey hanging tight aboard one of Japan’s speedy commuter trains. In the video short, you’ll notice that Mickey doesn’t share dialogue – but words are not needed to enjoy this madcap cartoon adventure!

As you can see, the latest “Split Decision” poster features two very different Donalds! In the video short, Mickey takes Donald Duck to Professor Von Drake’s lab to cure his temper but something strange and unexpected happens!

Our “Three-Legged Race” poster features Mickey and Pete teaming up for a big race after Minnie chooses to partner with Daisy.  As you can see in the cartoon video short, Mickey wants to win “fair and square” but not every racer agrees with that approach, including Pete!

The “Wish Upon a Coin” poster – inspired by Mickey’s popular cartoon short – was unveiled during our special New Year’s Eve LIVE stream.  As you can see, Mickey and Minnie are at the wishing well and we thought it was the perfect artwork to begin our countdown series and a new year of magical wishes!