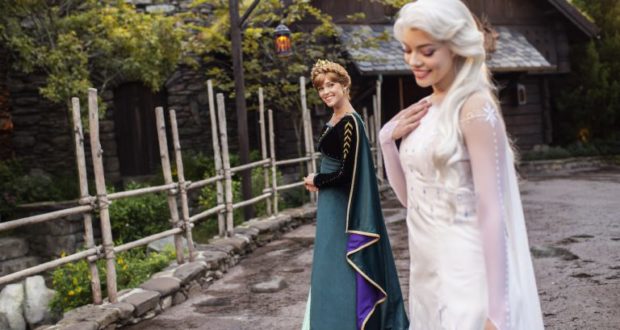 We are so excited about the film release for Disney’s Frozen 2. This is another chapter in the Frozen universe and of course this means new dresses that the duo are wearing in the film. These new looks have also carried over into Walt Disney World and other Disney Parks, and Disney Parks Blog shared a look at them! Check out this great video below:

Anna and Elsa can be seen in their new looks at Royal Sommerhus at Epcot and Anna & Elsa’s Royal Welcome at Disney California Adventure Park. They can also been seen at Frozen Fantasy Gardens Village at Hong Kong Disneyland.

Once the Frozen Celebration begins at Disneyland Paris in the coming year, Elsa and Anna will also appear with their new looks there.

Kids can also get their looks to match at Disney Parks. They will be available exclusively in the parks through November 30th and then will be online at shopDisney.com starting November 30th.

Here is a list of locations where you can find Frozen 2 merchandise, thanks to Disney Parks Blog:

If you haven’t seen the film yet, you can check out the official trailer here:

What do you think of these new looks for Elsa and Anna?