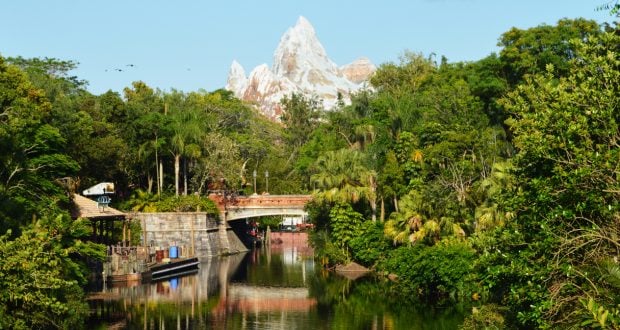 Do You Know These Six Secrets About Disney’s Animal Kingdom?

Disney’s Animal Kingdom was the fourth theme park to open at Walt Disney World. It has been in operation since April 22, 1998. Area wise, it is the largest of the four theme parks. It is known for animals, shows, and a few thrills. The park continues to change, with Pandora – The World of Avatar coming in 2017. New restaurants and nighttime offerings have recently added to the fun. Here are six secrets that you might not know about Disney’s Animal Kingdom.

Nothing happens by accident in the planning stages at Walt Disney World. There are hidden meanings around many corners. The numbers that you will see and probably not notice are no exception. Here are two examples. You might see a sign in DinoLand U.S.A. for Route 498. April, 1998 (4/98) is when the park opened. There is also a parked truck with the license plate “DAK 1998”. DAK stands for Disney’s Animal Kingdom, while 1998 again refers to the year that the park opened.

Here is proof that Disney Imagineers have a sense of humor. In the loading area for DINOSAUR, look overhead and you’ll see a set of pipes. There are three colors; white, red, and yellow. There are chemical formulas written on those pipes. While most people won’t know this, any chemists in your party will be able to tell you that they are the chemical formulas for mayonnaise, ketchup, and mustard. Why those were chosen has never been released, maybe the Imagineers were planning on hitting Restaurantosaurus once the ride was finished.

The Tree of Life is not only the park’s icon, it is also a marvel. Many guests believe that it is a real tree, but of course it isn’t. There are over 7,000 branches and 100,000 leaves. Those leaves were replaced for the nighttime experiences at the park. The body of the Tree of Life is an offshore oil rig that has been turned upside down. There are over 300 animals carved into the trunk. One of the most famous is Greybeard, a likeness of the first chimpanzee that Jane Goodall ever observed. Dr. Goodall herself picked the spot where Greybeard sits.

Beastly Kingdom was a land at Disney’s Animal Kingdom that never materialized. It was supposed to feature mythical creatures; both good and evil. Although the land never happened, there are still a couple of nods to it at the park. One is the fact that there is a Unicorn parking lot. Another place where you can see a throwback to the land that never was is at the front gate. There is a dragon in the sign over the ticket booths. The Disney’s Animal Kingdom logo has a dragon in it as well.

Expedition Everest – Legend of the Forbidden Mountain is considered by many to be one of the best thrill rides at Walt Disney World. It reaches a speed of 50 miles per hour and is known for its 80 foot drop. Here are a few things that you may not know about the popular coaster. At 199.5 feet, it is the tallest of all the Walt Disney World mountains. It is made of 1,800 tons of steel and 18,000 tons of concrete. You are not really entering Disney’s version of Mount Everest, the ride takes place in the Hidden Mountain. Everest is the other peak seen in the distance. The Yeti is 25 feet tall. He runs in B-mode, which means that he doesn’t have his full range of movement. The strobe lights give the appearance of more movement, but in fact he hasn’t run in A-mode since a framing split a few months after the ride opened. Because of the strobe lights, he’s been given the nickname Disco Yeti. There are no official plans to change back to A-mode anytime in the near future.

One of the main attractions at Disney’s Animal Kingdom is Kilimanjaro Safaris. You’ll ride out into the savanna and see dozens of animals. Have your camera ready, because you’ll get some great pictures. It’s almost as if the animals will pose for you! That is not by accident, Disney has some tricks to keep the animals and guests all happy. One of the tricks is that food is placed in trees and along the rocks near the road that the vehicles drive on. That keeps the animals up close. Another trick is to pipe cool air to spots along the path. That is why there’s a good chance that you’ll see a lion or two on the ledge on Pride Rock. The piped-in air makes it a cool, comfortable place for them to relax.